The last couple of years have seen a growing interest in blockchain technologies among the health and healthcare research and practice communities. Blockchain is the core distributed ledger technology powering the well-known bitcoin cryptocurrency. However, the interest of our communities in blockchain goes far beyond bitcoin.

In March 2018, a consortium of scholarly publishers, including Springer Nature, launched Phase 1 of Blockchain for Peer Review “to make the peer review process more transparent, recognisable and trustworthy.” Earlier, in 2017, the US Centers for Disease Control and Prevention (CDC) started experimenting with blockchain for sharing public health data to help public health workers respond faster to a crisis.

At the time of writing (20 June 2018), a PubMed query using the term ‘blockchain’ retrieved 41 indexed papers. Blockchain solutions are currently being explored in different parts of the world for securing patient and provider identities, for managing pharmaceutical and medical device supply chains, for medical fraud detection, for medical data sharing among researchers, for research data monetisation, and in crisis mapping and recovery scenarios using blockchain-enabled augmented reality.

The Internet of Things (IoT) is the foundation of the smart healthy cities and regions of today and tomorrow. The market for IoT devices and apps that negotiate with, and pay, each other for secure, safe operation and services is expected to grow in the near future. Examples of these IoT devices include mobile and wearable devices that pay for public transportation, and autonomous connected devices and vehicles for smart city emergency/disaster response, such as a drone defibrillator, or a drone for the delivery of ordered medicines and medical supplies, or a self-driving ambulance car (or helicopter).

The blockchain-powered, distributed peer-to-peer apps powering these smart devices, drones and vehicles would cut out the ‘middleman’ and the dependence on third-party centralized providers for navigation and other geospatial data, and would mitigate the possibility of an IoT-powered autonomous vehicle being hijacked and driven to a wrong location.

The challenges facing blockchain technologies today include interoperability, security and privacy, as well as the need to find suitable and sustainable business models of implementation. However, these challenges are not insurmountable, and I expect blockchain technologies to get increasingly powerful and robust, as they become coupled with artificial intelligence (AI) in various real-word healthcare solutions involving AI-mediated data exchange on blockchains.

Even though bitcoin is a controversial subject, seen by some as a flawed economic concept, it has given us blockchain, with its foundations of decentralization, cryptographic security and immutability. It is impressive to see how these concepts are being used today in many serious ways, decoupled from their original implementation in bitcoin.

Despite going to different areas and health insurance systems, creating a useful record of patient integrity is one of the biggest health care challenges. Blockben provides the ability to create a reliable site to monitor changes, which changes many issues related to data integration between proprietary systems. In fact, the block is a unique glue that keeps a very fragile health card. 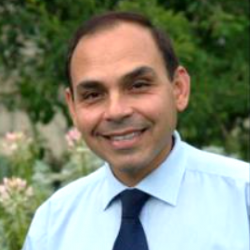 Maged is Senior Member of IEEE, and has >150 publications, with a Google Scholar h-index of 37. He was twice appointed as WHO/Europe Expert Adviser, and is the founder and Editor-in-Chief of BMC's International Journal of Health Geographics.