Female genital mutilation (FGM) is widely practiced in Iraqi Kurdistan Region (IKR) with a prevalence of around 40%. The prevalence, in fact, varies by geographical locations ranging from 4% in Duhok governorate to 58% in Erbil governorate and 70% in some specific rural areas of Sulaymania governorate.

The roots of the practice of FGM in IKR are unclear. Although the practice is common in Iraqi and Iranian Kurdish areas, it is less common in other parts of Iraq and in the Kurdish areas of the neighboring Turkey. Having a significant part of the Kurdish population living outside cities, where a high prevalence of illiteracy, poverty, and the presence of conservative Islam appear to play a role in the high prevalence of FGM.

Understanding women’s perspectives of FGM is particularly critical for understanding the roots of the problem and enhancing the effectiveness of preventive programs. While few studies have assessed the prevalence of FGM and its associated factors in IKR, very limited research has examined how people think about this practice.

Therefore, my colleagues and I conducted a study to explore the perspectives of Kurdish women of FGM with the aim of uncovering discrepancies and commonalities between women of different socio-educational groups. For this purpose, we used Q-methodology, a novel tool for systematic study of subjectivity.

Our study, published in BMC Women’s Health, uncovered four distinct factors or viewpoints reflecting different perspectives of women around FGM in addition to a consensus perspective. The first factor, entitled “positive cultural tradition”, centers on recognizing FGM as a positive cultural aspect and an essential part of the Kurdish culture. This factor reflects the position of those women who still believe in practicing FGM to avoid cultural embarrassment or stigma and maintain a good position in the society. The women with this viewpoint had undergone FGM, were poorly educated, were originally from rural areas and were from the low socioeconomic class.

The second factor, “active opponents”, positions around actively and openly opposing the practice of FGM and considering the practice a violation of human rights. Such position might reflect the increased awareness of these women about the problem of FGM in the region. The women with this viewpoint were very well educated, were originally from the urban areas and were from the middle socioeconomic class.

The third factor, “role of law”, stresses the importance of having and enforcing law for combating FGM and prosecuting FGM practitioners and people who subject their daughters to the practice. The women with this viewpoint have not undergone FGM, were fairly educated, were originally from urban areas and were from the middle socioeconomic class.

The fourth factor, “health concerns and passive opposition”, represents the perspectives of recognizing the importance of health concerns resulting from FGM and opposition of the practice but not in an active manner. 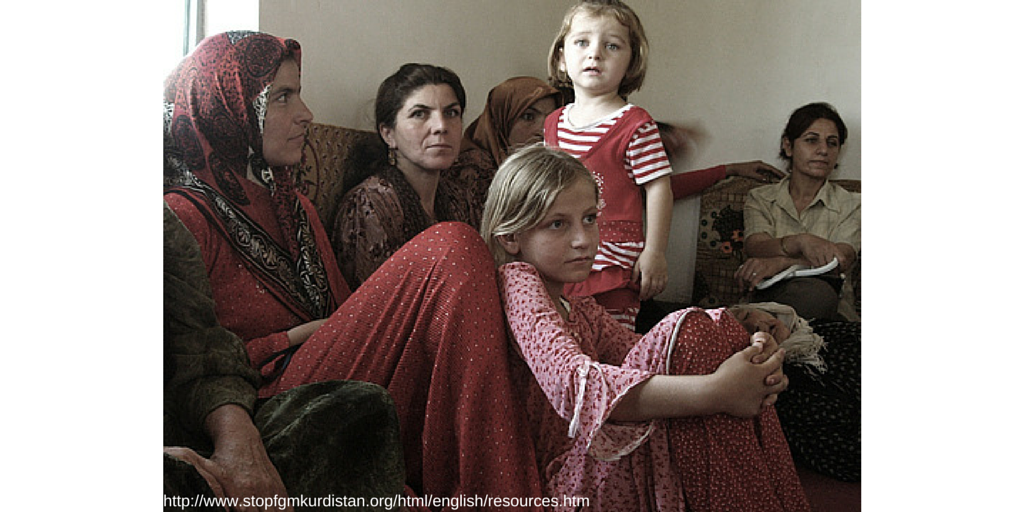 With the recent advocacy and awareness campaigns in the region many people have become more aware of the health concerns related to FGM. However, rejecting a practice that is deeply embedded in the roots of the society cannot be simply achieved by recognizing its harms. The women with this viewpoint were very well educated, were originally from urban areas and were from the middle to high socioeconomic class.

The consensus perspective, “marital role”, centers primarily on lack of effect of FGM on women’s marital role and maturity. In several societies where FGM is practiced, a girl can’t be considered an adult/women until she has FGM and hence a girl cannot marry without going through FGM. However, this notion does not seem to be an important reason for performing FGM in IKR.

Although several reports had showed a high prevalence of FGM, limited research has so far been reported from IKR particularly in terms of the actual roots of the problem and people’s beliefs about it. Our results provide more insight about this problem and might guide the efforts for its banning.

Our study has also demonstrated the complexity and diversity of perspectives about FGM particularly with having the poor and poorly educated women from the rural areas still considering FGM a positive cultural aspect. These findings will have practical implications for those working on fighting this practice.

In fact, some important efforts have been made to fight FMG in IKR. The reports of high prevalence of FGM in 2007 resulted in launching the campaign of “Stop FGM in Kurdistan” by a number of civil society organizations and women’s rights groups to abandon this practice. Such effort resulted in passing the Domestic Violence Bill in June 2011, which includes several provisions criminalizing FGM in IKR.

The regional government established a supreme council for women’s affairs to oversee and coordinate activities and a special police directorate responsible to combat all types of gender-based violence including FGM. Many civil society organizations are working with communities and religious leaders to reduce the practice of FGM.

Finally, I hope that the findings of our study and other similar studies can add to these efforts through providing more insight into this problem and helping in guiding the efforts to fight FGM in IKR.