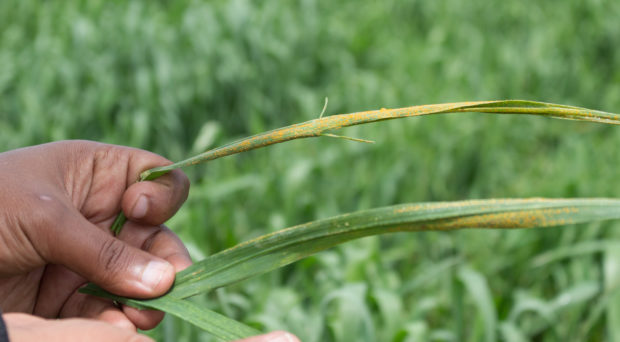 Plant pests and diseases are a major threat to global food security and have the potential to destroy whole crops if left untreated. It is estimated that halting the spread of fungal diseases in the top five food crops alone could feed over 600 million people. Wheat – one of these top five crops – is under increasing threat, with fungal pathogens causing wheat rust diseases the biggest concern.

Today, those in less-developed countries are at greatest risk of large-scale crop losses due to inaccessibility of effective diagnostic tests and control measures. Just like with human disease, if you see visible symptoms but aren’t sure of the causal agent, then how can you action the correct treatment? This is where genome-based diagnostics and disease surveillance comes into play. Identifying the precise strain of a pathogen ensures the most appropriate control measures are actioned and, particularly for less-resourced countries, limited resources used wisely.

Revolutionary portable genome sequencing devices aid disease diagnostics
In clinical labs, the full genetic code of human disease agents is frequently unravelled to assist with disease diagnostics. Since the release of the first portable genome sequencer by Oxford Nanopore in 2015, such genomic-level diagnostics and surveillance can now be carried out exactly where the disease outbreak occurs, no matter how inhospitable the environment. This has revolutionised the speed of diagnosis, building real-time genomic information on how quickly pathogen strains evolve and helping chart their transmission routes.

These initial studies focused on viral pathogens. However, the need for real-time genomic-level diagnostics is also crucial for fungal diseases. But to use this strategy for fungi is not straight forward. Fungal genomes are frequently tens of thousands of times larger than viruses and often cannot be separated from their host plant. Hence, we couldn’t just sequence an infected leaf containing the fungal and (considerably larger) host plant genomes, it would be currently prohibitively expensive. We needed a different approach.

Implementing portable genomic-based diagnostics for fungal pathogens
We decided to use a method called targeted re-sequencing that is frequently adopted for testing specific human disorders. This approach focuses on analysing the genetic code of a smaller subset of genes that are informative for a particular condition. This targeted approach substantially reduces the volume of data generated per sample and thereby the associated cost.

In our study published in BMC Biology, we focused on the wheat yellow rust fungal pathogen (Puccinia striiformis f.sp. tritici). We first identified genes that showed high variability in their DNA code between pathogen strains and then used this small subset of genes for targeted re-sequencing. This allowed us to rapidly determine which particular strain is in our infected leaf sample. This new system termed – MARPLE (Mobile And Real-time PLant disEase) diagnostics – is also highly suited to disease emergencies as it can generate detailed data on which strain of the yellow rust pathogen is in a farmer’s field within just 48 hours of collecting a sample.

Following such wide-scale devastation, Ethiopia developed an integrated wheat rust early warning system to prevent future catastrophic losses. Yet, the ability to define the precise strain of the pathogen in a farmer’s field in real-time was just not possible with prevailing methods. MARPLE was designed precisely to fill this void.

Working with the Ethiopian Institute for Agricultural Research (EIAR) we developed a mobile lab system housed in a single hard-case, removing the need for additional infrastructure or high-level specialist expertise. We successfully trialed an optimized MARPLE pipeline in Ethiopia in September 2018. As the ultimate demonstration of its robust nature and mobility, we also ran the pipeline in the back of a Landcruiser directly in the field, demonstrating feasibility without continuous mains electricity or access to any additional laboratory equipment (see https://acaciaafrica.org/marple-diagnostics/).

Our partnership between the John Innes Centre and CIMMYT (Centro Internacional de Mejoramiento de Maíz y Trigo) also allowed data generated through this method to feed directly into early-warning systems and control recommendations. This project integration is now positioning Ethiopia as a world leader in pathogen diagnostics and forecasting for wheat rust diseases.

What’s next for MARPLE diagnostics?
The gene panel we developed for targeted re-sequencing is also very flexible and can easily accommodate additional genes as required. We are currently incorporating genes that encode proteins identified as conserved fungicide targets across fungal pathogens. This will allow real-time monitoring for mutations that could alert us to breakdowns in fungicide utility for the yellow rust pathogen. MARPLE diagnostics provides a road map for mobile, genomic-based, strain-level diagnostics that can be readily applied to other complex fungal pathogens that continually threaten global food security. 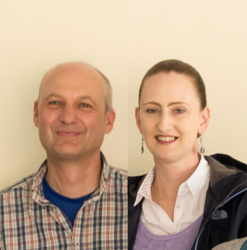 Diane Saunders is a group leader at the John Innes Centre leading a research program focused on studying (re-)emerging plant pathogens that pose a significant threat to agriculture. She has a particular interest in the wheat rust pathogens, which are known as the “polio of agriculture” due to the threat they pose to wheat production worldwide.
Twitter: @Saunders_Lab; @JohnInnesCentre

Dave Hodson is a senior scientist with CIMMYT with over 20 years of experience executing and managing GIS-related projects for agricultural research and development in developing countries. For the last 10 years he has worked on developing and coordinating a Global wheat rust monitoring system across Africa, Asia and Latin America.
Twitter: @CIMMYT