Sloth hair is long and coarse and depending on the species can contain either a number of grooves or irregular transverse cracks that increase in number and size with the age of the animal. These features are ideal for inhabitation by a wide variety of organisms, ranging from moths, beetles, and cockroaches to ciliates, fungi, and algae.

It is a popular assumption that algae in particular form a symbiotic relationship with the sloth, obtaining shelter and a good supply of water as sloth fur absorbs water extremely readily, and providing in return camouflage and extra nutrients via diffusion and absorption through the hair and skin. 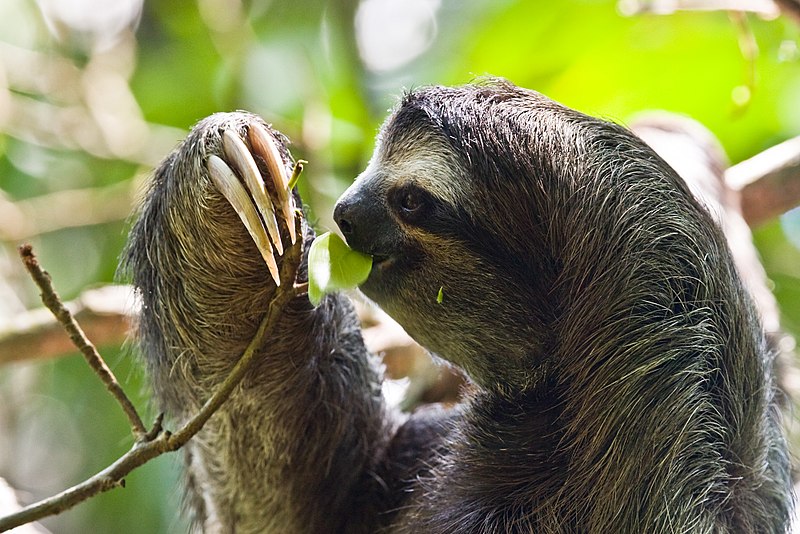 Until now, there has been no good evidence to support this hypothesis. New research published recently in BMC Evolutionary Biology is the first to use molecular methods to explore evolutionary relationships among the algae inhabiting the fur of all six sloth species.

Milla Suutari and colleagues found that the predominant algae inhabiting sloth fur was Trichophilus welckeri. It is passed directly from mother to offspring and young sloths gain the algae and other parasites by the time they are a few weeks old. This species of algae is host specific and has not been found to occur in any other environment. This finding adds strong support to the hypothesis that there is a co-evolutionary relationship between the sloths and the algae of the genus Trichophilus, which may well only exist as a symbiont.

In fact, most of the varied eukaryote organisms living in the individuals’ fur differ between sloth species and this is suggested to reflect the divergence of the sloth genera about 20 million years ago, which may have led to the separation of the cohabiting  communities.

Awesome post! Thank you so much for sharing. This entire Blog is fantastic!

This article really helped, but i wish it went more in depth.

its great for research

This is a actually very good go through for me. Must confess that you are 1 of the most effective web maker actually saw. Thanks for posting this informative web.