Today’s museums are home to an overwhelming number of objects from the depths of history, ranging from relics of cultures and societies long past to the remains of ancient leviathans that defy modern understanding. Among these myriad objects are a smaller proportion with great cultural or scientific significance. Their importance to human understanding of the past means they remain sequestered away in museum collections, safely kept in the knowledge that their significance is fully understood.

Megalosaurus and its cousins went on to kickstart the first dinosaur craze in Victorian England.

The right dentary of Megalosaurus bucklandii, part of the lectotype of the specimen (one part of a collection of specimens that is the quintessential example of a species), is one such artefact at the Oxford University Museum of Natural History (OUMNH). This jawbone represents the first scientifically described dinosaur, the first fossil specimen to be recognized as belonging to a then as-yet unknown group of animals. Described by the Reverend Williams Buckland in 1824 and then included among the first description of the ‘Dinosauria’ by Richard Owen in 1842, Megalosaurus and its cousins went on to kickstart the first dinosaur craze in Victorian England. This legacy arguably persists to this day.

In spite of this, surprisingly little is known about the specimen itself. Museum records for the specimen are scant. It is known that it was purchased in 1797 but little information appears to have been recorded on what actually happened in the interim between then, its description and today. This is especially concerning as the specimen shows considerable evidence of restoration in plaster, as noted by Benson et al. (2008). The process of conservation, the treatment and stabilization of damage and degradation to museum objects mandates knowledge of what has previously been done to an object. An absence of this information makes future conservation efforts challenging and risky.

In order to overcome this conservational concern, we attempted to reverse engineer the conservational history of the specimen, utilizing cutting-edge imaging techniques. Previous research (Wilson et al. 2017) exploring the specimen using X-Ray Computed Tomography (XCT) – the use of X-rays to reconstruct the internal and external structure of an object based on its relative density – revealed the presence of two separate plasters used to repair the specimen. However, this was insufficient to properly determine the nature of the plasters.

To better characterize these plasters, two elemental mapping methods were used: Energy-Dispersive X-ray Spectroscopy (EDS) and X-Ray Fluorescence (XRF). Both of these methods rely on the principle of bombarding a material with high-energy x-rays and detecting the emission of characteristic secondary x-rays, which determine what elements are present in the sample.

Analysis of the two plasters revealed that the more common plaster, P1, was composed of impure gypsum plaster (Plaster of Paris), filled with sand grains, grains of the original specimen, and small particles of the mineral Minium, a reddish lead oxide. The plaster was also coated in shellac. The second plaster, P2, was also a gypsum plaster, lacking these Minium and sand grains but being coated in barium hydroxide instead of shellac, a moisture sealant. The identification of these plasters has helped to better elucidate previous conservational efforts and how to treat the specimen in the future.

This overall represents an extremely conservative approach to conservation by the conservator. The integration of reddish Minium particles represents a conscious effort to colour the plaster to better match the weight and colour of the original specimen and to prioritise verisimilitude of the plaster restoration. The plaster restoration was also extremely conservative of the geometry of the specimen, with small fragments of the original damaged specimen being suspended in plaster.

Also revealed from the analysis are a number of new findings. Hidden teeth, in the process of growing and being replaced were elucidated by the XCT analysis, shedding some insight on the tooth replacement of Megalosaurus. Additionally, a complex series of dentary canals within the jawbone were revealed. These structures are poorly explored but recent research has begun to show that they could be of evolutionary significance. Thus, even an old specimen has some new tricks to show.

Overall, Megalosaurus presents a powerful case study for conservation professionals and shows how cutting edge technologies can reverse-engineer the chequered history of objects that are poorly understood. It showcases new opportunities to get new life out of old objects, and demonstrates that even objects that are thought to be understood can still surprise. 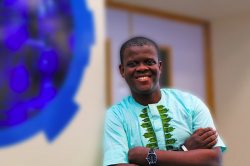 Paul Wilson is a PhD student at WMG - The University of Warwick. He is approaching the end of his studies, which concern the application of 3D Printing and other cutting-edge visualisation methodologies in Cultural Heritage. His wider research interests include Palaeontology, Conservation and User Experience methodologies.