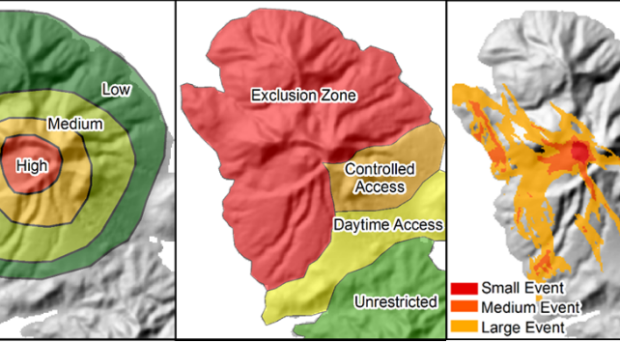 Volcanic hazard maps are visual, geospatial depictions of the areas that could be impacted by various volcanic phenomena during or subsequent to an eruption. They are developed to communicate a complex array of hazard information to those at risk, or those responsible for managing those at risk. If they are developed, communicated and used appropriately for a given volcanic setting and cultural and political context, hazard maps can play a major role in mitigating risk to vulnerable communities by identifying known hazardous areas to guide land use and evacuation planning. They contribute to disaster risk reduction by putting all parties quite literally “on the same page” regarding hazard information. Volcanic hazard maps used during the recent 2018 Kilauea eruption crisis on the big island of Hawaii and the 2018 eruption crisis of Volcán de Fuego in Guatemala illustrate the importance of such maps as hazard communication and mitigation planning tools during crises.

Recently, the Hazard Mapping Working Group of the International Association of Volcanology and Chemistry of the Earth’s Interior (IAVCEI) facilitated a series of workshops to enable sharing of volcanic hazard mapping experiences, including experiences of how volcanic hazard maps are developed and used around the world. The workshops revealed some interesting insights.

Firstly, volcanic hazard maps are extremely variable! Although most show similar types of content, such as hazard footprints or zones, they vary greatly in input data, communication style, appearance, and visual design. It turns out that this diversity of hazard maps around the world stems from a whole range of factors, including differences in map purpose, the specific methodology and models used, the level of understanding of past eruptive history of the volcano, the prevailing scientific and cartographic practice at the time, the status of volcanic activity, and any local agency standards or policy requirements in place. This variety makes it really challenging for people working on volcanic hazard maps as there are no best-practice guidelines to follow (although the IAVCEI hazard mapping working group is developing a Source Book of useful tips!).

Secondly, there are very few contributions in the international literature that reflect on the philosophy behind the generation of particular maps, the methods used and challenges faced in generating them, and the lessons learned by observing how the maps were (or weren’t!) utilized in hazard and risk management. This stems primarily from the fact that such maps are operational-style documents, commonly developed by busy volcanologists at volcano observatories or geological surveys (who typically have the mandate to produce hazard assessments) and subsequently published as government reports. Until now, there has been no obvious venue for creators of volcanic hazard maps to reflect on their experiences and describe their maps to a wider international community of practice, yet the sharing of these experiences could be so valuable to other researchers grappling with similar challenges.

After attending these workshops I was motivated to write an article about my hazard mapping experience in the Eastern Caribbean, focusing not so much on the detailed physical hazard assessment behind the maps (which had indeed been published earlier, along with the original maps), but rather on the lessons learned during the process of both map creation and the subsequent engagement with map stakeholders. My hope was that some of these lessons might be useful for other maps makers when creating maps to be used by stakeholders, such as emergency managers and land-use planners.

In an exciting new development, the Journal of Applied Volcanology, with input and support from the IAVCEI hazard mapping working group, has launched a new Hazard Map article type.

We in the working group then decided to go a step further, and actively encourage other map-makers to share their experiences! In an exciting new development, the Journal of Applied Volcanology, with input and support from the IAVCEI hazard mapping working group, has launched a new Hazard Map article type.  We really hope this will inspire our colleagues around their world to share their experiences of developing and socialising their hazard maps, and explore how the maps have been used in volcano disaster risk reduction efforts, thus giving their maps the attention and recognition they deserve so we may all benefit.

Interdisciplinary and even transdisciplinary research is often required to address the challenges of disaster risk reduction and the development of resilient societies. In the field of volcanic hazard and risk the open access Journal of Applied Volcanology, which was established in 2012, provides researchers and volcanic hazard practitioners around the world with an authoritative platform to demonstrate and discuss research at the nexus between volcanoes and society.