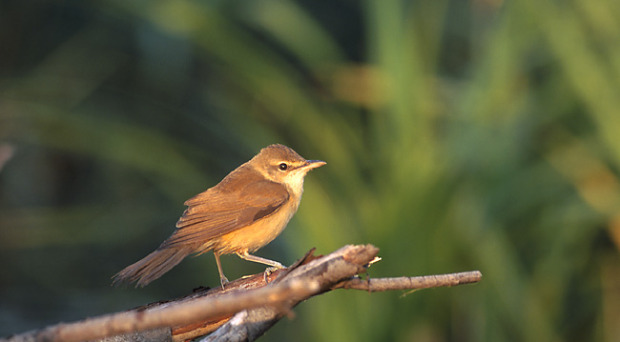 A long term study of mild chronic malaria infection in a wild population of great reed warblers in Sweden has demonstrated that the infection ultimately causes  fitness costs to the birds. Long term life-history data showed fewer offspring are produced by infected parents because their life-span is shortened and that this reduced longevity was associated with shortening of the telomeres that cap chromosomes and protect them from stresses.

Malaria infection is widespread among birds and more than 200 species of avian malaria parasites have been identified. The three most common species found in great reed warblers are Plasmodium relictum, Haemoproteus nucleocondensus and Plasmodium ashfordi, the latter being the most virulent of the three.

Great reed warblers breed in Europe and Western Asia and migrate to tropical Africa to overwinter and most birds either become infected during their first winter in Africa or are never infected. Survivors of the acute infection phase remain with a low level chronic infection for life. Populations of these birds have been studied at Lake Kvismaren, southern Central Sweden since 1987.

The work reported by Muhammed Asghar and colleagues took place over a period of 25 years. Birds were followed throughout their lives and could live up to 9 years with an average life span of 2.8 years for males and 2.9 for females; 92% of breeders surviving the winter returned to breed again.

The study population was found to contain roughly equal number of uninfected birds and birds with non-symptomatic infections. Male song rate (measured over 15 minutes) and female nestling-feeding rate per hour were used as proxies to determine the short-term costs of chronic malaria infection. No differences between uninfected and infected birds were detected. Furthermore, annual reproductive success and survival to the next year was not affected by malaria infection, suggesting that, initially, these low level infections were not costly to the birds.

However, by following individual birds throughout their life the researchers were able to show that the life-span of birds infected with malaria was significantly shortened and life time reproductive success was reduced because infected parents did not live as long. On average infected birds only produced 4 fledglings whereas uninfected birds produced 8.6. The work clearly demonstrated that these asymptomatic parasitic infections are far from benign.

Long-term studies of a wild population such as this are uncommon, especially when costs of infection are also monitored; the dedication and perseverance of the team is to be applauded. However the researchers did not stop there; they looked for clues to account for the underlying physiological processes that caused the reduced life-span.

The ageing process has been linked to the shortening of telomeres.

These are nucleotide sequences that cap the ends of a chromatid and protect the chromosome from deterioration. Chromosomes can shorten during the process of cell division or when exposed to oxidative stress and if they become too short the cell dies. An accumulation of such damage causes ageing. The length of the great reed warbler’s telomeres declines with age as has previously been demonstrated. In wild birds telomere shortening was monitored each year of life. Telomere shortening decreased with age more rapidly in infected birds and seemed to be related to the degree of infection.

Using an experimental setup where great reed warblers were infected the malaria parasite P. ashfordi, the length of telomeres in blood cells of infected and uninfected birds was measured every 5th day during the acute phase of infection and every 10 days during the chronic infection phase, for several months. This confirmed that loss of telomere length was significantly associated with malaria intensity during the acute phase of infection.

Finally, malaria infection in mothers, but not fathers, affected the telomere length of their offspring. As uninfected female great reed warblers grew older their progeny had successively longer telomeres whereas as infected mothers aged their chicks had shorter and shorter telomeres. The presence of malaria parasites not only results in loss of reproductive success but those fledglings that are produced are of poor quality. The costs of infection are passed on to the offspring.

These great reed warbler populations have provided excellent study material with which to explore the cryptic costs of long lasting asymptomatic malaria infection but also some aspect of the ageing process. It remains to be seen whether these costs of avian malaria infections are also experienced by humans with long term barely detectable parasite loads.