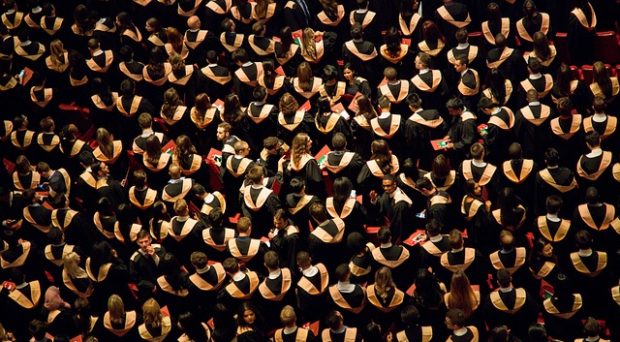 Six months have now passed since I was officially conferred my PhD; after an almost Odysseus-like saga, I am of course hugely grateful. However, as time passes, the overriding sense of relief has been replaced with feelings of a more nuanced nature.

Many of those I know well, including distinguished professors and recent graduates, spoke to me candidly of their feelings of a profound anti-climax rather than any morsel of jubilance, which one may expect post -PhD.

Some of my pessimism is due to a sense that despite my best efforts I have failed to make a meaningful difference and that essentially very little has changed. I am somewhat of an idealist, so it is feasible that this has been the very necessary wake-up call to reality that I needed.

Many of those I know well … spoke to me candidly of their feelings of a profound anti-climax rather than any morsel of jubilance, which one may expect post -PhD.

Saying this, my research has received interest, especially since publishing the overview of my findings in BMC Public Health and more recently in BMC International Health and Human Rights but it has not lead to the action, a change in policy or shift in mind-set or even initiation of meaningful dialogue and discussion that I had desperately hoped for.

The research did garner transdisciplinary interest from those in public health, social scientists and religious leaders with many people calling it ‘bold’. Peer reviewed publishing certainly gave the topic a greater legitimacy, especially when arguing for the idea that religion, more broadly, can act as a determinant of health.

I had hoped that by analyzing how religion can influence health that the next step was that these assets could be leveraged upon, for example, the greater use of religious leaders to promote public health issues such as obesity and mental health and that it would act as a catalyst for discussion with other people from different parts of the world facing similar problems; an entry point for exchange and to share.

I recall sending one of my mentors, a rather spontaneous message asking the non-rhetorical question:

… it’s the research that changes you

She replied, succinctly: “the research does not change anything; it’s the research that changes you”.

Indeed it has, although this was very much an unintentional consequence.  However, my objective was meant to be far more than an academic exercise; it was meant to make a positive impact, although I must admit that it has been character building.

Academia is set within a context of social, historical and political elements and within this reside stakeholders, policy makers, government and last but not least people

Perhaps there are limits to academia, I wonder whether the focus on publications rather than participatory research helps or hinders. Academia is set within a context of social, historical and political elements and within this reside stakeholders, policy makers, government and last but not least people; those at risk, those who are affected and those vulnerable- those whose lives we are purportedly trying to improve in the first place.

Maybe it is all too soon, some recall from their experience that it took 10- 20 years before demonstrable change on the ground resulted, especially in the third sector, I suspect I am far too impatient. I wonder whether others share my frustration, those academics who have yet to see the translation of their research and recommendations into action, say 5 years down the line. If so, what is required to make those changes.

So there is a sense of urgency and not an infinite amount of time available to instigate a change and put research into practice.  In many countries, civil society is weak, so power and influence are privy to the few- the elite echelons, the rest of the public are left without a voice at best or simply marginalized. With this in mind, the end point cannot, for me at least, solely be publication- it is part of the process, which includes advocacy, community participation and change, even if that change seems infinitesimal now-six months on.

You can read more about Sima’s research on the the influence of religion on public health policy in her guest blog posted here.

Dr Sima Barmania qualified in Medicine, which included an intercalated degree in Community Health Science at QMUL and has a Master’s in Public Health from The London School of Hygiene and Tropical Medicine. She completed her PhD in November at the United Nations University, International Institute for Global Health which is based in Kuala Lumpur, Malaysia ( https://iigh.unu.edu/). She is currently an Honorary Research Associate at UCL- Institute of Education as well as a freelance writer on global health, based between London and Kuala Lumpur.