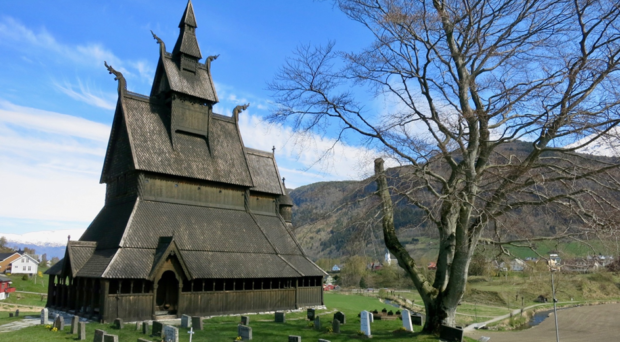 Hopperstad Stave Church, sited in the municipality of Vik in Sogn og Fjordane, Norway
© The Author

Hopperstad Stave Church is one of 28 stave churches left in Norway and is an important part of Norway’s cultural heritage. The church is considered to be one of the oldest stave churches in the country.

In fact, dendrochronological dating recently carried out by the Norwegian University of Science and Technology (NTNU) has revealed that the church is older than determined in previous estimations and is believed to have been built between 1131 and 1132, thus it is contemporary to Urnes Stave Church.

As part of the preservation program of Hopperstad Stave Church, a physico-chemical study of a recently observed white substance on parts of the church was done to find out whether the substance was potentially harmful for the church’s materials, the environment and the visitors.

This project began when I was trying to find a topic for my MA thesis in objects conservation at the University of Oslo. I was – of course! – the last one in my class to find a topic to write about.

During one of our many lunch breaks at the very nice university building in Frederiksgate 3 in the heart of Oslo, one of my fellow students asked me whether I wanted to write about building conservation.

That idea struck me like lightning! I surely would get a job after my studies if I did that! She asked me if I was interested in investigating an unidentified white substance on parts of Hopperstad Stave Church. I immediately replied: “Ja, gjerne!” (“Yes, please!”).

So, a couple of weeks later, my thesis supervisor, two conservators and from the Norwegian Directorate for Cultural Heritage (Riksantikvaren) went to Vik in the county of Sogn og Fjordane, which is an hour’s flight with a propeller plane from Oslo.

The whole church is covered with a thick layer of dark brown–blackish pine tar. As you walk closer to the southern entrance and portal, you see that they are beautifully adorned with carvings and wrought iron decorations and fittings.

Then comes the (negative) surprise! A white substance covers on the top half of the ancient door and portal, as though someone has sprinkled a massive amount of table salt on the door.

As you step inside the church, you also see that there is a white, yet thinner, substance on parts of the interior. This is clearly not right!

Our scientific curiosity emerged, and we had to figure out what this substance was and how it got there — and we came prepared.

Armed with a portable X-ray fluorescence (XRF) spectrometer to take in situ non-destructive elemental measurements, we got a first idea about the chemical composition of the white substance. With scalpels and glass containers for sampling, we were able to proceed to analysis in the lab.

Luckily for me, my supervisor was as excited about the investigation as me, and we adopted an innovative analytical lab protocol that featured: scanning electron microscopy (SEM), inductively coupled plasma‑optical emission spectrometry (ICP-OES) and total organic carbon (TOC) analyses of the samples.

The work was performed in collaboration with ETH Zürich with great help and expertise.

The analysis revealed that the white substance was in fact crystalline, inorganic and calcium-rich: most likely calcium carbonate that had been deposited on the surface from an environmental source.

Many suggestions and theories about the origin of the white substance were advanced prior to the analyses, such as tarring, salt migration from the nearby cemetery, atmospheric agents, leakages from the roof, biological infestation, previous treatments with pesticides, and so on.

We were able to exclude most of these suggested causes of the formation of the substance after the analyses. However, it is still a mystery why the white substance is there and especially why it is so localized on parts of the southern side. The list of possible (and thinkable) causes may have been narrowed after analysis, but it has not made the phenomenon any less mysterious.

The phenomenon has given rise to a few not very scientific explanations about the occurrence of the substance, which are not included in the work, but were surely a part of the joy of working on this research.

This has been a true, challenging detective work with few leads and a lot of theories. We managed to identify the main suspect, but we haven’t yet found the motive…