Electronic cigarettes (e-cigarettes, ECs) are the centre of much controversy due to public health concerns associated with some of its components including nicotine which is highly addictive. Additionally, the availability of such devices to young never-smokers and the re-normalization of smoking is a growing concern. This has been highlighted in the news lately where a study shows three times as many children have tried e-cigarettes than those who have smoked tobacco. However, on the other hand ECs are considered to be potentially less harmful than tobacco smoke and are used to aid smoking cessation.

The debate on ECs between clinicians and public health professionals has been discussed extensively at several meetings including the European Respiratory Society, the E-cigarette summit and the sixth session of the Conference of the parties to the WHO Framework Convention on Tobacco Control. The World Health Organization (WHO) is implementing regulations to restrict e-cigarette advertising and to end e-cigarette use indoors in public and work places. Although it is recognized that e-cigarettes may be harmful, a large group of scientists and clinicians who are specialists in nicotine science and public health policies signed a statement early this year asking the WHO to consider classification of e-cigarettes under different standards as regular cigarettes. These specialists argue that e-cigarettes are tobacco harm reduction products and are more likely to help people quit smoking compared with other conventional methods, and thus play a significant role in reducing non-communicable diseases and associated deaths. 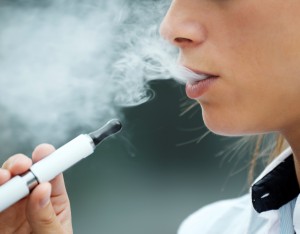 To encourage discussion on this controversial topic, BMC Medicine has launched a new article collection titled “Promise vs perils of electronic cigarettes”. The first series of articles to be published are two commentaries by experts who have contrasting views on the subject. However, both authors identify the need for more evidence, which is currently lacking.

In the first commentary Peter Hajek, Professor and Director of the Tobacco Dependence Research Unit at Wolfson Institute of Preventive Medicine, argues based on the current evidence that health professionals should recommend e-cigarettes to smokers who are unable to quit smoking with existing treatments. He says:

“If EC are allowed to carry on competing with cigarettes as a consumer product, there is a good chance that they will continue to improve in offering smokers what they want, cigarette sales will fall, and over the next 10 years, in countries where EC are available and competitively priced, the use of combustible tobacco will virtually disappear. The public health benefit would be huge, even if recreational use of nicotine carries on.”

The public health benefit would be huge, even if recreational use of nicotine carries on.

Charlotta Pisinger, Associate Professor and senior researcher at the Research Centre for Prevention and Health, Glostrup Hospital, Denmark argues that even if ECs are less harmful than conventional cigarettes they are not safe. Additionally, she points out that much of the current research on ECs can suffer from methodological issues, significant conflicts of interest and inconsistent results. Thus there is much need for strong evidence to address the concerns raised. She emphasizes:

“As a doctor I have sworn “First Do No Harm”, as a researcher I call for substantial evidence with very consistent findings, and as a public health professional I am obliged to take long-term consequences for the whole population – both smokers and non-smokers – into account, before recommending a new product.”

Further critiques from invited experts will be published in due course on a spectrum of topics related to e-cigarettes, from research agendas, health policies and regulation to psychiatric and public health outcomes.