Our guest author, Ali. A. Mokdad is based at University of Texas and affiliated with the Institute of Health Metrics and Evaluation (IMHE). He is the lead author of a recent study published in BMC Medicine, focusing on deaths caused by liver cirrhosis.

Liver cirrhosis is a costly disease that is devastating to families and their finances. Most of these deaths are preventable, however. Countries can reverse the tide of liver cirrhosis by implementing a variety of cost-effective solutions.

When my colleagues and I saw just how many deaths occurred each year as a result of liver cirrhosis, we decided to write a paper to raise awareness about these disease trends and the steps that could be taken to prevent these deaths.

Measuring the disease burden, or early death and disability, caused by liver cirrhosis worldwide can indicate where action is needed. Tracking countries’ progress in fighting this disease can teach us valuable lessons about ways that countries can reduce these deaths. 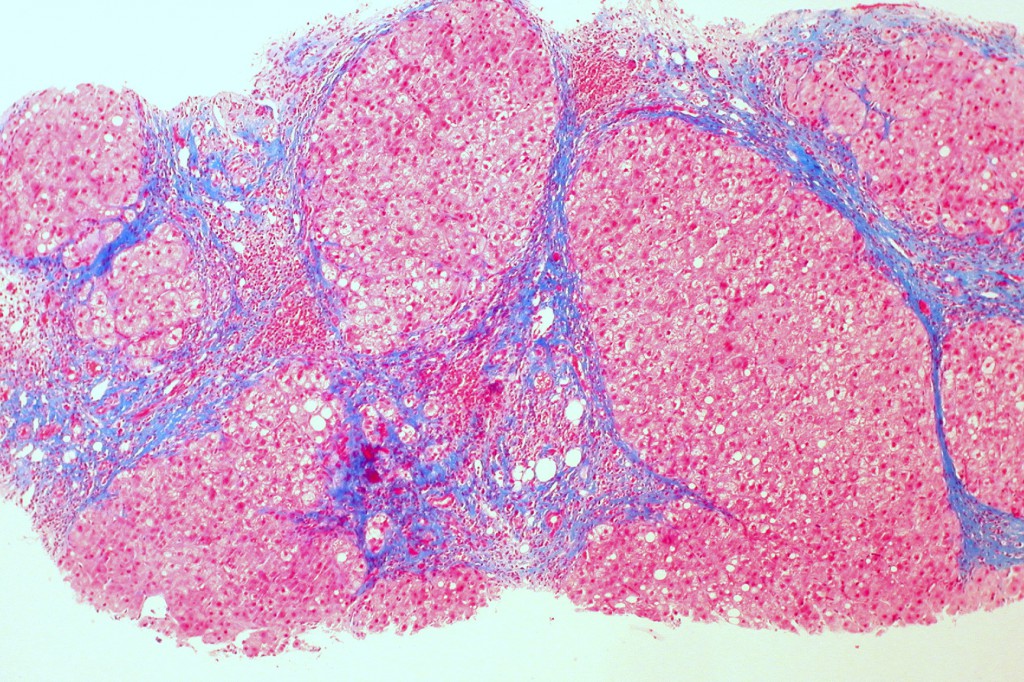 Cirrhosis scars the tissue of the liver. (Image courtesy of Ed Uthman)

According to the Global Burden of Disease 2010 Study, liver cirrhosis killed 676,000 people in 1980. Since that time, population growth and aging increased the number of deaths to around 1,000,000 people in 2010. Adjusting liver cirrhosis death numbers for changes in population size and ages over time, however, reveals that age-standardized cirrhosis mortality declined by 22%. Even though the world has made progress in combatting liver cirrhosis, this indicates that global progress has not been dramatic enough to combat the effect of rapid demographic changes.

Blame it on the booze? In Central and Eastern Europe, heavy alcohol use is the main cause of liver cirrhosis. The removal of alcohol restrictions coupled with a steep rise in alcohol use following the dissolution of the Soviet Union were key factors that fueled the cirrhosis epidemic in these regions. While mortality from liver cirrhosis recently dropped in these regions, Hungary, Romania, and Moldova had some of the highest age-standardized rates in the world in 2010.

Researchers hypothesize that these countries’ success could be related to people changing their patterns of alcohol consumption and shifting toward drinking while eating instead of drinking without food. Declines in cirrhosis mortality in these countries could also be linked to improvements in alcohol quality.

Western European countries—especially Spain, France, and Italy—have lowered liver cirrhosis mortality by decreasing alcohol consumption, restricting home brewing of alcohol, and improving alcohol quality. These successes can serve as models to other countries where liver cirrhosis epidemics are linked to heavy alcohol use.

In India, which accounts for one-fifth of the world’s liver cirrhosis deaths, a variety of factors appear to be fueling these deaths, including increasing hepatitis C and B infection, alcohol use, and diabetes. Indeed, improper disposal of medical waste and reuse of contaminated needles has caused epidemics of hepatitis C in countries such as Egypt, Pakistan, Ethiopia, and several countries in central Asia, leading to high mortality from liver cirrhosis.

As with many chronic diseases, both governments and individuals should take an active role in preventing deaths from liver cirrhosis. Many of the strategies governments can use to prevent liver cirrhosis are highly cost effective, such as policies and programs to reduce heavy alcohol consumption, Hepatitis B vaccination, policies and programs to prevent the use contaminated needles, and improved infection control in health centers. Individuals can lower their risk of liver cirrhosis by decreasing their alcohol consumption and sharing needles that may be contaminated with diseases such as hepatitis.

Liver cirrhosis is a disease that kills many, yet it can be so easily prevented. With lifestyle changes, better communication, and new policies, we can save lives that really need not be lost.

Thank you for this important piece of work. It was my pleasure to review it and write the accompanying commentary in BMC Medicine “The global burden of liver disease: a challenge for methods and for public health” (https://www.biomedcentral.com/1741-7015/12/159). This is a really challenging area of work, given that cirrhosis mortality data were not available for 58/187 countries. It highlights the strengths of GBD’s sophisticated methods – albeit with some caveats – for making estimates across the gaps. Peter Byass

A solid piece of writing, thanks