Patients requiring immediate and urgent medical care for acute illnesses or injuries will fall under the care of those in the emergency medicine sector. These healthcare professionals include paramedics, who deal with pre-hospital care, and also includes emergency department physicians and nurses, and a growing body of clinical researchers in this area. Given that decisions made in the emergency setting can make the difference between life and death, interest in this medical specialty is understandably high.

This month, BMC Medicine attended the 5th National Emergence Medicine conference in London, UK, which aimed to stimulate discussion on current issues in emergency medical care, and to provide participants with ideas that can be translated into clinical practice.

One of the highlights of the conference was the emerging nature of pre-hospital research. Paramedics who are at the forefront of pre-hospital care have traditionally, and erroneously, been seen to only play a role in first aid and subsequent transportation from the scene of the emergency to the hospital. However, it is clear that research in this field is a growing area, which will enable paramedics to make better evidence-based decisions to further improve patient outcome. Sonia Byers, who is the Research and Development Manager at the North East Ambulance Service NHS Foundation Trust, gave an excellent presentation on this issue, highlighting that since 2009, patient recruitment for pre-hospital trials has increased sixty-fold, reflecting the growing interest in this area of research.

Fiona Lecky further emphasized the importance of pre-hospital care in relation to patient outcome. One debate that her group is trying to resolve focuses on patients who have suffered head trauma in addition to other serious injuries. In her presentation, she discussed the HITS-NS trial. This trial is in its final stages, and aims to determine whether or not patients with serious head trauma should be transported straight to the nearest hospital regardless of whether that hospital has specialist neurosurgeons, or whether they should bypass the nearest hospital and go to straight to a specialist neurosurgical centre. 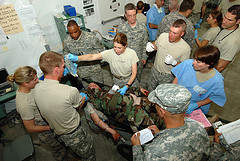 Trauma management in the military was the topic of another discussion by Colonel Tim Hodgetts, who was medical director of the Camp Bastion field hospital in Afghanistan and has served in Iraq, Kosovo and Northern Ireland. Military personnel usually suffer a higher proportion of severe injuries than civilians, but the health outcomes of injured soldiers are often better than for injured civilians, which suggests that trauma therapy in the military is superior. For instance, patients in a military setting are able to be treated appropriately in a much faster timeframe than those in a civilian setting, and the first ten minutes, termed the ‘platinum ten minutes’ have been shown to be vital. Colonel Hodgetts discussed the lessons for civilian trauma health care professionals from the military, including better efficiency of health services, and the technology that can be  implemented in  civilian medicine. As well as being beneficial to civilian emergency medicine, translation of the military’s success to a civilian setting will ensure that the high standards obtained in emergency medicine in Afghanistan will be sustained for the next military campaign.

It is hoped that the novel insights discussed in this conference will provide useful information for practitioners of emergency medicine.