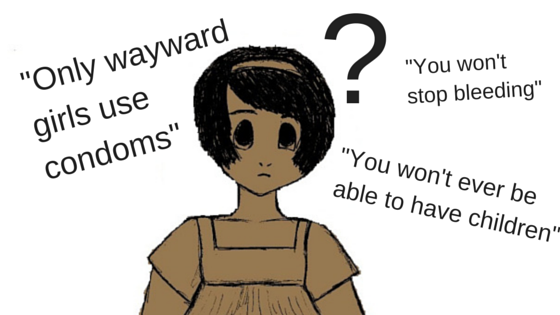 Myths about contraception by Alanna Orpen

If your partner refused to use a condom because, and I quote, ‘it’s painful for me and makes my ‘dangly bits’ ache all day following’, would you say ‘codswallop’ or be too trusting to contradict him?

This will ultimately depend on your cultural upbringing. For those raised in a society that advocates sexual education and awareness, you may think the former. But for those born in a society where contraception is a cultural taboo and it is difficult to access accurate information, naivety will give you no choice but to believe him.

In Kenya, contraceptive use remains low among youth. 73% of currently sexually active single women aged 15–19 are not using any contraception and every year, about 13,000 Kenyan girls drop out of school due to accidental pregnancy.

This is because any national communication to create awareness about family planning seems to have been exclusively for married women, highlighting the need to limit family size, while youths have been ignored. This is quite extraordinary, considering the number of sexually active youths.

Rhoune Ochako, a demographer and statistician, and her team spoke to Kenyan girls from the lowest socio-economic backgrounds and carried out in-depth interviews to allow the girls to speak more freely.

Although all who participated in the study were familiar with modern methods of contraception, there was confusion about appropriate usage and engrained belief in myths. Health providers and other educational sources were rarely mentioned as the source of information on contraception. Instead, most insights were the product of hearsay, obtained through consultation with others through social networks.

Generally speaking, social networks are a positive way to share information about contraception, but, as this study shows, it can also be a powerful channel to spread negative influences. The perceptions of influential peers and important community members propagate myths and over exaggerated claims about rare side effects, such as uncontrollable bleeding. This is then taken as fact.

Shame and prostitution are associated with condom use. If a girl wishes to use condoms, she will be accused of being sexually wayward and believed to be untrustworthy. Girls are even judged for just procuring contraceptives.

The biggest fear about contraceptives is the belief that they render you infertile. Many girls chose not to take them as they believe it will reduce the number of children they could conceive, as well as causing birth defects and abnormalities.

There is inequity over access to family planning. Young people are inhibited, while married women are free to ask for family planning. Gender inequality is also partly at fault. It is the husband’s or partner’s decision whether contraceptives should be used.

They say contraceptives will mess with their reproductive organs and reduce a woman’s libido. Another argument was that condoms affect their genitals and cause them great pain after the act is performed.

As well as the myths thwarting girls using contraceptives, there are other barriers. Financial challenges limit access and health facilities offering family planning are not equally distributed throughout the country.

Sometimes they complain because of the way they (pills) make you feel tired, bring mood swings and sometimes you have a low libido. This will make him complain because he will start accusing you that you are being unfaithful to him.

It is saddening to read the lies being fed to these girls, and even more disheartening that those spreading these tales believe them. It seems that these fabricated seedlings are already deep-rooted in Kenyan society, so the sooner health planners can debunk the myths, the better. Otherwise, it will be an ever greater challenge to up root those seedlings and convince the community otherwise.

Things are already picking up. The results of this study triggered the launch of one campaign. Population Services Kenya is working in collaboration with the Reproductive and Maternal Health Services Unit on the ‘C-word’ campaign. This is a national communications strategy that is channelling messages through radio, TV, online and social media to address misinformation and increase the use of modern contraceptives among young Kenyans.

Kenya is not the only country fighting barriers to contraceptive use. In Uganda, men are typically unsupportive of their partner’s use of family planning methods. The hope is that initiatives will soon be set up to address men’s negative health beliefs regarding contraceptive services.

Researchers now recognize that the term ‘family planning’ may be inappropriate. At the service level, it is deemed only appropriate for mothers, but unsuitable for those without families. There are discussions that the term should be replaced with a more neutral one, such as ‘contraception’ that’ll be more encompassing.