Poison frogs within the superfamily Dendrobatoidea (the superfamily of poison frogs) contains numerous species that use bright coloration to visually advertise their toxicity or unpalatability to predators. The presumably most toxic vertebrate on earth, the frog Phyllobates terribilis, with its bright yellow coloration also uses this strategy.

However, a recent publication in Frontiers in Zoology demonstrated the presence of toxic alkaloids and possibly repellent smells in a brown little frog from the same superfamily, which was thought by decades to lack chemical defenses. This finding shows how little we know about chemical defenses in cryptically colored species (e. g. brownish) and increases the chemodiversity of compounds found in poison frogs.

Have you ever wondered what is the smell of a poison frog? Well, we can tell you that it’s like nothing any of us had ever smelled before—so we were determined to find out what made up that very unique smell.

We used a headspace technique (HS-SPME/GC-MS) to characterize the smell of Silverstoneia punctiventris, an endemic poison frog from Colombia. The smell is composed of a mixture of 6 toxic alkaloids and 20 volatile organic compounds (VOC) reported for the very first time in this species and the complete superfamily. This technique allowed a simultaneous analysis of alkaloids and VOCs, in contrast with previous analysis in other species exclusively focused on alkaloid profiles. The alkaloids detected are known to be harmful to predators, thanks to their toxic effects and bitter taste.

The characterization of the smell of this less colorful frog incorporates a new olfactory dimension of chemical defense in dendrobatids, where frogs’ smells could be airborne transported and perceived by distance (without contact). In the same way, as bright coloration could be a useful visual signal to advertise toxicity, a bad smell (whatever that means to a predator) could be a useful olfactory signal to advertise toxicity. Possible behavioral functions proposed in this article need to be verified in the future. In addition, surveys of the volatilome in other dendrobatids will be essential to examine our hypotheses. Right now, we know that humans (as potential predators) can detect, at least, some poison frogs’ volatiles. Indeed, the motivation of the authors to characterize this cryptic frog volatilome came from observations, or better, smells from field work after manipulating the frogs.

In the meantime, the undeniable truth is that, in opposition to what was thought some decades before, not always the most colorful poison frogs are more toxic, and we need to gain more knowledge about the biology and the chemistry about brownish dendrobatid frogs. Fighting against this color bias of how science is performed within this field will lead to discovering more secrets, as those who have been recently uncovered from S. punctiventris. 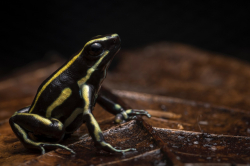 Mabel Gonzalez is a scientist that recently finished her PhD in Chemistry in the Laboratory of Advanced Analytical Techniques in Natural Products (LATNAP) at the Universidad de los Andes, Bogota, Colombia. Her interest includes the Eco-metabolomics of poison frogs, and the chemical ecology and chemical communication in frogs and other organisms.

Marco González-Santoro is a Colombian PhD student in the Department of Biological Sciences at the University of Pittsburgh. His research focuses on exploring the interplay between sexual selection, sensory ecology and behavior shaping neotropical poison frogs biodiversity.

Andrés E. Brunetti currently serves as a Researcher at the Institute of Subtropical Biology (CONICET-UNaM), Misiones, Argentina. His research investigates the molecular and metabolic bases of symbiosis between bacteria and amphibians.His research interests include diverse topics of amphibian biology like morphology, chemical secretions, behavior, and evolution.

Pablo Palacios-Rodriguez is PhD candidate in the Biological Sciences Department at the Universidad de los Andes, Bogota, Colombia. His research is focused on the ecology and evolution of cryptically colored dendrobatids, especially in the biogeographic Chocó.

Jack Hernandez is an enthusiastic naturalist, wildlife photographer and conservationist, member of Conservation International Foundation. His interest includes the cognitive and behavioral evolution of poison frogs and the cognitive strategies used by amphibians in learning processes.

Adolfo Amézquita is a Colombian herpetologist. His research is focused on the behavior and physiology of herpets.

Chiara Carazzone is Associate Professor in the Chemistry Department at the Universidad de los Andes, Bogota, Colombia and leader of the Laboratory of Advanced Analytical Techniques in Natural Products (LATNAP). Her research group focuses on analytical chemistry, and Metabolomics of diverse organisms from Colombia.