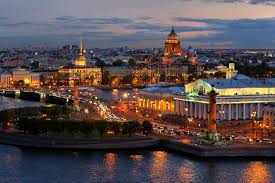 The international conference on Molecular and Evolutionary Oncology has been held in Saint Petersburg on 5-6 November, 2014.
The meeting gathered Russian scientists (along with colleagues from Italy, France, Germany, Netherlands and US) involved in this very innovative research field focused on the discovery of new genes developed as results of evolutionary genetic processes. Such process parallels the development of cancer genes, which could allow the identification of specifically-linked cancer genes as well as provide an internal hint to the whole evolutionary process. Relevant for the evolutionary process would be the role of RNA (retroviruses) and DNA viruses, capable of DNA integration.
The conference, organized by St. Petersburg Polytechnic University and The Biomedical Center, included 21 presentations, followed by articulated discussions. The invited speakers were prevalently oncologists, evolutionists/geneticists, and evolutionary oncologists. The purpose was to see what current theories are there in oncology now and what the problems are, how evolutionary theory decides the problem of progressive evolution, and what would be the acceptance of the new theory – the evolution by tumor neofunctionalization theory – by representatives of oncological and evolutionary theories.
In particular, the session on oncological concepts discussed serious problems in the current oncological theory. Especially brilliantly it was shown by Professor Imyanitov in his presentation “The controversial aspects of fundamental oncology”. To the session contributed other oncologists – Professors Anisimov, Bershtein, Zabezhinskii (Petrov Research Institute of Oncology, St.Petersburg), Kisseljov, Gurtsevich (Blokhin Oncology Center, Moscow) – outstanding representatives of Russian oncological community. The general understanding was that the oncology is on the eve of serious reconsideration of some basic concepts, including the concept of malignancy.
The outstanding representatives of evolution/genetics were Professors Yankovsky (Director of the Russian Institute of General Genetics, Moscow), and Drozdov, the author of original theory of filema of organic world (Institute of Biology of the See, Vladivostok). Their attitude to the new theory is enthusiastic.
Most of the presentations related to the evolutionary oncology were from Dr Kozlov’s group. He stressed that there is an important transition from the hypothesis to the theory which is connected with accumulation of the evidence and book publication, but also with confirmation of nontrivial predictions. Dr Kozlov published for the first time the hypothesis in the 1970s,over 35 years ago. But, as physicists say, all theories are hypotheses anyway. The current theory explains many things, predicts several things, and suggests the new strategy in the war with cancer.
Kozlov’s collaboratos gave 7 further presentations on the hood of goldfishes and on evolutionarily novel genes. The brand new outstanding presentations were by Dr. Emelyanov and Mrs. Kate Matyunina, a current post-doctoral fellow. Dr. Emelyanov developed a model of transgenic regressible fish tumor and has shown that 1500 genes activated during tumorigenesis continue working after tumor regression. Mrs. Matyunina analyzed these genes and found that a considerable proportion of them is evolutionary novel in fish, conserved in humans and determines progressive characters such as morphological innovations. These two presentations played a key role for the whole conference because they presented direct evidence in support of the hypothesis.
Finally, Dr. Chubenko presentation was focused on the new approach in cancer therapy, i.e. metronomic chemotherapy, which may constitute a part in the new strategy of fighting tumor as suggested by the theory – keeping the tumors in chronic controlled condition and trying incorporate tumors in the network of functional feedbacks.
In conclusion the conference was a huge step forward on new strategies in the fight against cancer.

The Meeting organizer, Dr Kozlov, recently published a book on the subject Evolution by Tumor Neofunctionalization: The Role of Tumors in the Origin of New Cell Types, Tissues and Organs distributed by Barnes & Noble at https://www.barnesandnoble.com/sample/read/9780128001653. A Kindle version is distributed by Amazon.
“Evolution by Tumor Neofunctionalization” explores the possibility of the positive role of tumors in evolution of multicellular organisms. This unique perspective goes beyond recent publications on how evolution may influence tumors, to consider the possible role of tumors in evolution.
Widespread in nature tumors represent a much broader category than malignant tumors only. The majority of tumors in humans and other animals may never undergo malignant transformation. Tumors may differentiate with the loss of malignancy, and malignant tumors may spontaneously regress. Cellular oncogenes and tumor suppressor genes play roles in normal development. Many features of tumors could be used in evolution, and there are examples of tumors that have played a role in evolution.