Privacy and ethical concerns about the publication of the HeLa cell genome sequence have generated a great deal of commentary.  In addition to a number of pieces from well-known scientific journals (1-2), the New York Times has also joined this interesting discussion (3).

Today, regulations require informed consent to be obtained prior to establishing a cell line from an individual. How do we treat HeLa cells that originally were established 62 years ago and without a consent? Who should claim the ownership of the cell lines, the original patient or the researchers who experimentally manipulated and selected the specific cell lines?  Perhaps both parties could claim the ownership, if any. 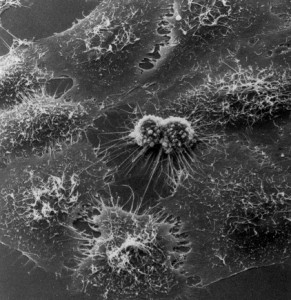 While interesting, debates such as this seem to miss one fundamental scientific issue.  The present HeLa genome, or any other HeLa genomes, while derived from Henrietta Lacks’s genome is not her personal genome. There is no doubt that the majority of DNA sequences are identical between HeLa cells and Lacks’ original cells.

However, HeLa cell genome and Lacks’s genome show very little similarity.   Lacks’ genome originally contained 46 normal chromosomes while most HeLa cells have 70-90 chromosomes with over 20 translocations, some of which are highly complex involving multiple chromosomal rearrangements.

To fully appreciate this point, one has to understand and define what the genome is.  The genome is not just a collection of genes, arranged like pearls in a string.  While individual genes produce functional parts or proteins, the genome structure has a function defined by the karyotype that provides the blueprint that describes how these parts work together (4-5).

In other words, the genome defines the network structure by providing the “system inheritance”. It is the karyotype rather than DNA sequence that defines the identity of the cell line as different derived cell lines could have similar sequences but different karyotypes (or genome context). This concept has recently been illustrated by re-interpretation the main function of sex, and the importance of the karyotype.

It turns out, karyotype rather than specific genes define the identity of the species (6-8).   In the case of the HeLa genome, the changes generated over the past few decades have occurred through multiple runs of genome re-organization during cancer evolution and initial cell culture experimentations.

These changes not only differ greatly from Lacks’s original genome but it can be argued that the HeLa genome is not actually a human genome anymore. In fact, some evolutionary biologists consider cancer cell such as HeLa cells to be their own unique species (see works of Julian Huxley and Leigh Van Valen).

In recent years, an increase of investigators including our own group have proposed/supported the notion that many cancer cells are no longer “human cells,” as judged by karyotypic changes (for more information, please check out our references on genome theory) (9-12).

Yes, many DNA sequences in cancer cells are still the same as compared to their original human cells, but if we are only judging by DNA sequence similarity, the same can be said to cells from other species.  Most eukaryotic species are defined by their unique karyotypes (despite sharing similar genes), demonstrating the importance of the genome, which is to organize similar genes to define the inheritance of each species.

Despite the fact that cancer cells are derived from normal somatic cells, they form newly emergent systems.  The process of cancer evolution is punctuated, and its products cannot reform the original genome structure.  Without a fixed cancer genome, the DNA sequence and karyotype profiles of dynamic cancer cell populations are so divergent from their original hosts that there should be little concern for privacy or ownership issues.

I fully concur with Henry Heng that HeLA cells are not what they used to be. Extant HeLa cells have a very different genome from what Ms Henrietta Lacks had. Genomes evolve. Or in terms that evolutionary biologists would find more appropriate, genomes develop insofar as changes are in a single generation, i.e. all mitosis and no meiosis. Genomes change in our own bodies while we are alive – see all the endoploidy (aka somatic polyploidy) throughout our tissues – and in cell culture lines that may be preserved after our deaths. Henry Heng, as well as Harris Bernstein, have done more than most anybody to demonstrate this crucial difference between small-scale genetic sequence changes and large-scale chromosomal changes. Kudos!

My difference with Henry regards ownership. For me, extant HeLa cells belong to Ms Lacks and her family. Extant HeLa cells are still her personal genome. I agree that this genome has changed, but development is something we expect of all individuals. Just because an individual changes, sometimes even drastically, does not make them a different person. We do not lose personal property or our personal identity when we get an education or get a tattoo or even when we get cancer. I wish that I could disown the genomes of my cancer cells, claiming that they are no longer my personal genome because of their large genomic changes, but I cannot. A similar argument applies to evolutionary change. Just because speciation occurs, even if via phyletic gradualism, does not disqualify any species from being part of the lineage. We expect change. While ancestral vertebrates incurred a pair of polyploid events, they are still part of the chordate lineage.

I admit that what constitutes ‘personal’ will vary from person to person. Similar sorts of debates rage about what constitutes an individual. These are normative matters. However, if genomic change is all that it takes to lose ownership, then most of my normal healthy liver and heart cells, which are highly endoploid, are no longer mine. That is a viewpoint I do not wish to adopt.

Root has raised many interesting points. It is always enjoyable to read his insightful ideas and comments.

One key disagreement regarding ownership might come from a differential appreciation of the genome’s role in normal development and disease processes. Developmental processes differ from cancer evolution. When completed normally, development does not drastically alter the majority of a given person’s genome but cancer progression does so extensively. This genome change is the main challenge for cancer research as cancer macro-evolution is punctuated and results in high levels of cell to cell genomic heterogeneity while development is more or less stepwise and produces less genome level heterogeneity.

Another point here is that lineage and the genomic identity (species) are related but different. Under normal developmental conditions, cells share similar average genome and both the lineage and identity of the genome is clear. In cancer, however, despite the relationship of daughter cells and parental cells connected by lineage, these cells often drastically differ in terms of genome identity. Just because there is a clear lineage from DNA point of view, does not mean that the cells are the same from a genome point of view. We do not call other species Human even though they share a lineage with us.

Yes, for some tissues, like liver, polyploidy is common, possibly due to stress responses. It must be pointed out that massive chromosomal translocations commonly detected in cancer are rare in healthy tissues. We and others are actively investigating this subject.

Finally, establishment of a cell line with a unique genome requires a lot of work and often some luck. Perhaps the scientist who created the cell line should be more responsible for the new genome identity if it is derived from experimentally defined artificial evolution?