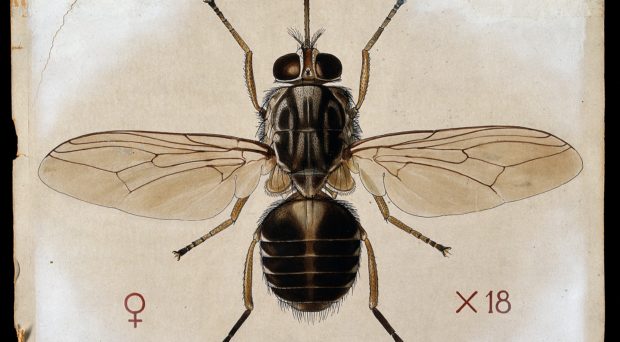 Human African Trypanosomiasis, also called sleeping sickness, is a fatal disease if left untreated. It is caused by the trypanosome parasite, transmitted through the bite of a Tsetse fly (Glossina genus).  There are two types of HAT in sub-Saharan Africa, linked to the sub-species of the parasite Typansosoma brucei – the Gambiense form (gHAT) in west and central Africa and the Rhodesiense form (rHAT) in eastern and southern Africa.

The World Health Organization has now set a target of interruption of transmission in a number of countries and absence of new infections by 2030 for gHAT, and elimination as a public health problem for rHAT. Control and elimination strategies for HAT have focused on a combined approach of intensive screen-and-treat programmes for human and animal populations and deployment of tsetse vector control methods.

In a recent study, researchers evaluate the cost of a tsetse fly vector control method in Cote D’Ivoire, that has recently achieved elimination of gHAT as a public health problem and is working towards absence of new infections and interruption of transmission. To reach these targets interventions such as vector control, need to be cost-effective and easily deployable.

Tiny Targets are small insecticide-impregnated panels of blue cloth and black netting which attract and kill tsetse flies. The blue fabric attracts the tsetse flies and they are killed by the insecticide. The aim is to reduce the density of the tsetse fly below the threshold needed for transmission of gHAT. If that can be maintained for a few years than the gHAT can be eliminated from the focal area. You can check out these standard operation procedures for using Tiny Targets.

Researchers in this study evaluate the cost of using Tiny Targets in different settings, and highlight how vector biology and human geography influence the cost of vector control.

Study site in Cote D’Ivoire: The area targeted for tsetse control intervention is approximately 130 km2  comprising of urban (Bonon town) and rural (villages, hamlets, encampments) populations. Ecologically this area has undergone deforestation, which has impacted the species of tsetse fly in the area. Whilst other tsetse fly species disappeared from the area, G. palpalis palpalis was able to withstand these environmental changes and is now the predominant species, and is known to also feed in urban areas as well as rural.

Survey: A detailed baseline survey was carried out in 2015 using Monoconical Vavoua traps to measure the abundance of tsetse flies at 278 locations. Radio spots where used to inform local populations of the Tiny Targets project, followed by focus group meetings, this was repeated in 2016 and 2017. Tiny Targets were deployed at the start of 2016, 1886 targets were deployed. After each deployment a monitoring survey was carried out using sentinel sites with fixed and mobile traps to measure tsetse fly abundance. More information on the intervention study is described in this research article.

During and after each activity the following data was collated:

A full cost approach was used for the economic analysis, meaning that all of the costs arising from a particular operation were included. Most prices remained constant across the two years. Where changes occurred (e.g. field travel allowances) 2016 price levels were used. All costs were converted to USD using the exchange rate of the time when they were incurred. Tiny Targets were purchased from Vestergaard at a cost of USD 2.50 each. Capital items and vehicles are considered lasting goods who’s use is more than a year, and can be used by other projects. This means only a proportion of their annual depreciation was allocated to Tiny Targets projects. Staff and project administration included time spent in the field, work before and after each trip, and project coordination per institute involved.

The data from the other studies were extracted and updated to allow for consistency and comparability of the projects. Metrics used for comparability included: annual cost of operation per target deployed, target density and area deployed (treated area), impact in terms of area protected from tsetses and number of people in that area.

The study reported interesting findings when comparing metrics between this study in Bonon area of Cote D’Ivoire with the projects in Chad and Uganda:

There were differences in the operational approach between the studies, for example in Cote D’Ivoire and Chad the implementation of tsetse control was embedded in research institutes, using a mix of staff from the research institutes and local labour when needed, whereas in Uganda the implementation was largely carried out by local labour. Differences in how monitoring and maintenance were undertaken also had cost implications, for example in Uganda monitoring was carried out alongside other activities, whereas in Chad and Cote D’Ivoire there were three/four annual monitoring field trips. The location and accessibility of the treated areas also had implications for transport costs, for example in Uganda some of the work could be done by bicycles or motorbike, which was not the case for Chad and Cote D’Ivoire.

However, the researchers highlight that the differences in cost between these three Tiny Target projects are largely due to the tsetse fly ecology and human geography in each setting. For a start the Tiny Targets themselves had to be adapted to the forest biotope of Glossina palpalis palpalis, requiring a larger target and thus more materials.  Furthermore in Uganda and Chad the tsetse fly species G. fuscipes fuscipes is found in the riverine system, meaning that the deployment of the Tiny Targets could be focused on habitats along the river in the targeted areas. Whereas in Bonon the tsetse fly species G. palpalis palpalis live more dispersed in the degraded forest habitat, and are also found in towns and hamlets, meaning that the Tiny Targets had to be deployed across the entire protected area.

The researchers point out that in evaluating cost of tsetse fly vector control we need to take into account the relationship between “treated areas” and “protected areas”. It should not be assumed that these are the same, in fact the relationship of the two is a function of control technique, the species of the vector and the local ecology. The “protected area” has to include all populations at risk and take into account the human and livestock population residing or travelling in tsetse fly infested areas and the furthest dispersal area of the tsetse fly. The “treated area” will depend on the tsetse fly species-specific habitat and bioecology which will influence deployment strategies. It is therefore important to use appropriate metrics for these as well as cost per person protected.

As gHAT is targeted for interruption of transmission, tsetse fly control will be a vital tool to break that transmission cycle and maintain the transmission break. Tsetse fly control strategies will need to be operationally feasibly, sustainable and cost effective. It is hugely important to understand what can influence the design, deployment and cost of vector control strategies in order to ensure the appropriate operational strategy and budget is used to achieve the national and WHO goals for HAT.