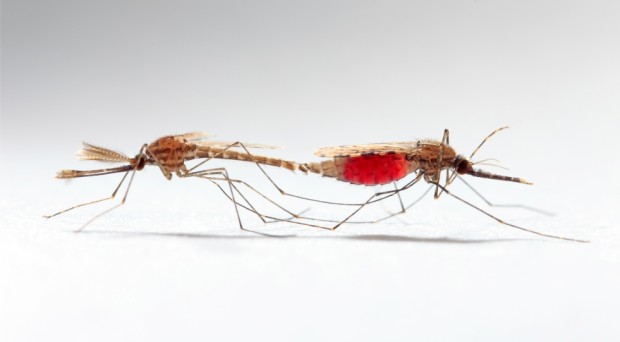 Mosquito courtship and mating is an aerial affair. Male mosquitoes gather in large swarms, swirling around and attracting females by the pheromones they emit. But smell is not the only sense involved in courtship, sound is also used. As a female flies into the swarm she is detected by the sound of her wing beat and males identify females by a phonotactic response to the specific sound frequency produced by her wing beat. A male and female will then attune to each other by altering the frequency of their wingbeats in a form of reciprocal tuning that is highly specific.

Wingbeats generate vibrations in the air that are heard by a mosquito because they cause oscillations in the antennae. These movements are picked up by flagellar ears located near the base of the antennae. Mosquito antennae are composed of segments, the third being divided into sections known as flagellomeres.

In the anopheline mosquito, Anopheles gambiae, sexual differentiation is controlled by the gene doublesex (Agdsx).

CRISPR/Cas9 mutants have been produced in which the  female-specific isoform of the doublesex (dsxF) gene was disrupted. Mutant females that were homozygous for the disrupted allele had an intersex phenotype and were sterile. When these mutants were introduced to caged populations of wildtype mosquitoes the populations eventually collapsed. This finding boded well for their usefulness in a mosquito-population control programme, where dsxF mutants could be gene-drive carrying. However, in order to assess the potential spread of the dsxF allele, more experiments were required to test their fitness, particularly with respect to courtship and mating with wildtypes.

This is where courtship songs enter this story.

Members of the Ear Institute, University College London, set about testing flight tones, generated by wing beats, and responses to these tones (phonotaxis) in  dsxF+/+,  dsxF+/− and dsxF−/− mutant mosquitoes reared in the Department of Life Sciences, Imperial College. During experiments, temperature was controlled, and wing length used as a proxy for size.

Their experiments answered the following questions:

Individual mosquitoes were tethered to tungsten wire and mounted in a custom-made cage used to hold a particle velocity microphone (experimental details can be seen here). Mosquitoes were stimulated to fly, and the microphone readings recorded. Wing beat frequencies were determined for different subsections of a flight period and the median calculated and used to assign a flight tone to each mosquito.

Groups of mosquitoes were housed together in single-sex cages and exposed to pure tones with frequencies of 100, 400 or 700 Hz for one minute at a time. Mosquitoes approaching the sound source were counted to determine which frequency they responded to.

Female mosquitoes did not respond to any of these frequencies, whereas all genotypes of males responded most to tones of 400 Hz, which most closely resembl that of wildtype females. Furthermore, there was no evidence that male flight behaviour was affected by the dsxF−/− allele.

Finally, male dsxF+/+ mosquitoes were exposed to the median tonal frequencies of the wing beats of dsxF+/+, dsxF+/− and dsxF−/− females to see how wildtype males responded to these female types. A dose response was noted, with most response to the flight tone produced by wildtype females and the least to that from the dsxF−/− group. Male dsxF−/− mosquitoes also responded more to wildtype female wing frequencies. Thus, wildtype and mutant males preferred the song made by wildtype females and are potentially less likely to mate with mutant females.

The release of male transgenic mosquitoes as part of a population-control strategy is a goal being pursued by several research groups. One of many considerations that need to be evaluated before this strategy is implemented is the likelihood that released males could compete successfully with those in the natural population, i.e. their reproductive fitness.

As the acoustic fitness of these male transgenic lines appears to be unaffected, male auditory behaviours could lead to mating success via the selection of wildtype females in mixed swarms of wildtype and transgenics. As the homozygous mutant females are sterile, attraction to dsxF+/+ females would be highly advantageous and could allow the mutation to slowly spread, causing population collapse. However, conditions in swarms in the wild would be much more complex than the environment created by these experiments and other factors will also be at play in mate choice, such as pheromone production.  Clearly this is a promising start and a thorough investigation of acoustic courtship and other aspects of the fitness of these transgenic lines in laboratory and semi- field conditions is warranted.