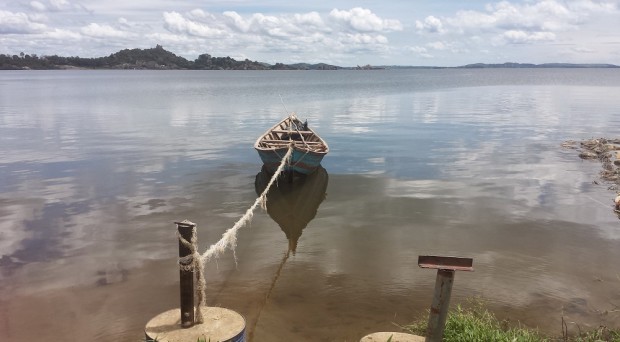 Picture yourself in a boat on a river, with avocado trees and sun-filled blue skies. You have been working all day, tired, hot and sweaty you jump in the river for a bit of a refresher. Cut to three months later, you’re feeling tired, unwell and there is a definite colour to your urine. But your local health facility does not diagnose you with the disease that is plaguing you, simply because there is not the expertise, or there has been a power cut, or the diagnostic test used has simply misdiagnosed you as uninfected. Sadly this is a problem for sufferers of urogenital schistosomiasis, a neglected tropical disease mostly affecting resource poor, developing tropical countries.

This parasitic trematode resides in the venous plexus blood system of humans and has a complex two-host life cycle involving an intermediate host aquatic snail of the Bulinus genus and transmission through direct water contact.

The disease is characterised by chronic fatigue, haematuria (blood in the urine), and urinary tract damage leading to severe kidney disease and bladder cancer; in addition, an estimated 16 million women suffer from female genital schistosomiasis (FGS), which can cause complications in relation to fertility and HIV transmission.

Recently, considerable effort has been made by government and non-government organisations, private and public sector companies and stakeholder groups to tackle neglected tropical diseases such as urogenital schistosomiasis. Merck Serono and Merck Group are donating Praziquantel, the only safe and effective anti-schistosomal drug, via national control programmes aiming to reduce schistosomiasis to the point where it is not a public health problem (less than 1% heavy infections in at risk communities). Recently there have been calls for an agenda on schistosomiasis elimination and a urogenital schistosomiasis elimination project is currently underway in the archipelago of Zanzibar.

Monitoring and evaluation of urogenital schistosomiasis control and elimination programmes require an accurate Point of Care (POC) diagnostic test for infection. Sadly the gold standard technique of urine filtration and microscopy, looking for schistosome eggs in 10ml of urine filtrate, does not perform well in areas of low infection intensities. This is due to egg output fluctuations, low test material (10ml urine), immature stages of schistosomes etc.

Another commonly used test is the detection of microhaematuria via urine dipstick as a proxy for S. haematobium infections but again sensitivity drops in areas of low prevalence and in people with low infection intensities. Furthermore, there is the possibility that the microhaematuria is caused by another infection or indeed underlying conditions. These issues with urogenital schistosomiasis diagnosis are a concern for national public health programmes looking to move from disease control to elimination.

Molecular diagnostics that target and amplify the schistosome parasite DNA from within urine and stool samples could potentially meet the sensitivity and specificity requirements. However, they often fall short of what is feasible in resource poor endemic regions. Local health centres and hospitals in affected areas often suffer from lack of specialised equipment, frequent power and water cuts and lack of trained personnel. In addition a lot of infections occur in remote rural areas with poor transportation infrastructure and no power facilities meaning that any diagnostic test must be easily transported at ambient temperature and usable in areas of no electrical input.

What is required by urogenital schistosomiasis control and elimination programmes is a fieldwork-friendly, robust, easy-to-use, sensitive and specific POC diagnostic test.

“I heard about the RPA technology at an International Society for Neglected Tropical Disease meeting where TwistDX demonstrated the technique on streptococcus infections in human mouth swabs” says Dr Bonnie Webster from the Natural History Museum. “I contacted TwistDX about developing a similar test for S. haematobium DNA detection in urine samples”. The authors of the study investigated the RPA’s sensitivity and specificity as a later-flow strip test for detecting Schistosoma species in urine samples.

Firstly suitable S. haematobium RPA primers were designed to target the species-specific Dra 1 DNA region of S. haematobium. Once a suitable primer pair was identified it was then tested using the RPA lateral flow (LF) strip test to determine sensitivity at different temperatures, incubation/amplification times and on different concentrations of S. haematobium gDNA.

Another limiting factor in fieldwork is sample preparation, which often requires laboratory equipment and can be labour intensive. The Dra 1 RPA-LF strip assay was tested on crude urine with different concentrations of S. haematobium gDNA to assess its ability to withstand PCR inhibitors found in urine. The Dra 1RPA-LF strip assay performed well, successfully amplifying 10pg of S. haematobium gDNA in 10% of crude urine confirming its potential as a basic POC urine “dipstick” test in field.

With further development this assay has potential as a POC diagnostic test of urogenital schistosomiasis in endemic field settings, greatly benefiting schistosomiasis disease national control programmes and schistosomiasis elimination programmes. “I very much hope we can expand on these interesting laboratory observations and develop a kit that would be useful in detecting positive human cases in areas of low prevalence” said David Rollinson, at the WHO Collaborating Centre for the identification and characterisation of schistosomes and their snail hosts.