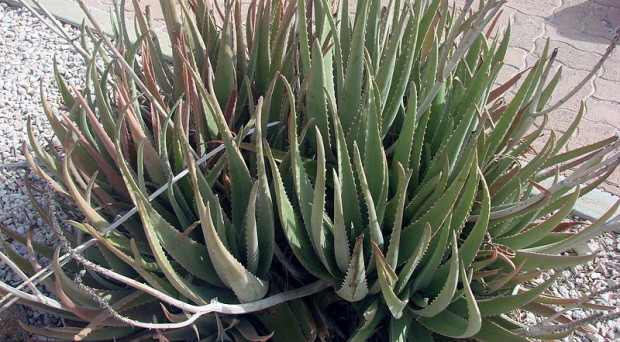 Go down to your local health food store or pharmacy today and you will find a bewildering array of products containing extracts from the plant Aloe vera. Gels or pills containing extracts from the rich succulent leaf mesophyl tissue, an adaptation to the arid conditions Aloe vera grows in, are traditionally applied topically for skincare or internally for digestion. Increasingly however, Aloe vera can be found in anything from dishwashing liquid to yoghurt.

While there might be considerable debate about the scientific evidence behind the many health benefits claimed for Aloe vera, its commercial success cannot be doubted. The estimated worldwide annual market value for Aloe vera products stands at around $13 billion.

Such extensive human use of Aloe vera is nothing new; historical sources suggest Aloe vera trade routes were well-established in the Red Sea and Mediterranean regions as far back as the 4th century BC.

How did this plant come to have such a privileged place in human commerce? After all, Aloe vera is far from the only species of aloe plant. Over 500 species of aloes exist, spread over Africa, the Middle East and various Indian Ocean islands.

All aloes show some degree of leaf succulence, the key characteristic behind the medicinal use of Aloe vera. Moreover, recent research suggests that the chemical composition of Aloe vera compared to other Aloe species does not explain its commercial importance; the leaves of many other species have similar mesophyll monosaccharide profiles.

Yet while most Aloe species grow in small endemic populations (all Aloe species bar Aloe vera are included in the CITES list of endangered species) Aloe vera has come to be cultivated across much of the world. Can we identify a good scientific reason for this?

The evolutionary history of the Aloe genus is poorly understood. Aloe vera itself is particularly mysterious; it has been transplanted so widely across the globe for commercial reasons that the location of its ancestral home is a matter of some debate. Sudan or the Arabian peninsula have been suggested based on similarities to Aloe species native to these regions, but locations much further afield have also been put forward, such as the Canary Islands.

An international coalition of scientists from the UK, Denmark, Norway, Australia, Ethiopia and South Africa, led by Olwen Grace of London’s Kew Gardens and Nina Rønsted of the University of Copenhagen, have attempted to resolve this argument.

The researchers assembled the most comprehensive genetic sampling of the Aloe genus yet produced. Utilising both newly sequenced plastid and nuclear DNA and a substantial number of pre-existing sequences stored in GenBank, they interrogated the evolutionary relationships among the aloes.

The researchers hoped to answer two key questions. First, they wanted to determine the likely ancestral home of Aloe vera based on the location of its closest relatives. Second, they asked if the global dominance of Aloe vera can be explained either by its evolutionary distinctiveness from other Aloe species or by historical factors, such as having evolved nearby to early human trade routes.

Their results, published today in BMC Evolutionary Biology, provide the clearest answers yet to these mysteries.

The origins of a species, and of a business

Based on strongly supported evolutionary relationships with morphologically similar species, the new research suggests that Aloe vera originated in the Arabian peninsula. Notably, this is right on the northernmost extreme of the natural range of aloes, where conditions are extremely hot and dry.

Aloes in this region are characterised by leathery leaves that protect the water storing leaf mesophyll. So does the evolutionary distinctiveness of aloes in this region suggest some atypical property of Aloe vera that led to its medicinal use by humans?

Perhaps not. Aloe vera itself does not appear to be especially evolutionarily distinct from other aloes; it is closely related to a number of other species native to the Arabian peninsula. Notably, none of these other species are used for medicinal purposes. Indeed, the other Aloe species that are used medicinally (all on a relatively small scale) are not especially close relatives of Aloe vera.

So there seems to be no evolutionary pattern predicting which Aloe species are used for medicinal purposes. It appears then that the popularity of Aloe vera cannot be put down to any underlying patterns in its evolution.

A matter of history

Instead, the researchers highlight historical causes as the likely reason behind the Aloe vera phenomenon. The Arabian peninsula where Aloe vera evolved is close to historically important early trade routes between Asia and the Mediterranean. It seems likely that people pragmatically selected a locally growing plant with large, succulent leaves and, finding Aloe vera did the job, saw no need to test similar plants growing in more exotic locations.

The medicinal use of aloes in general has come about by the coincidence that succulent leaf tissue, an adaptation for survival in arid areas, is also medically useful for humans. That Aloe vera has become the dominant species in this practice appears to be simply the coincidence of being in the right place at the right time.