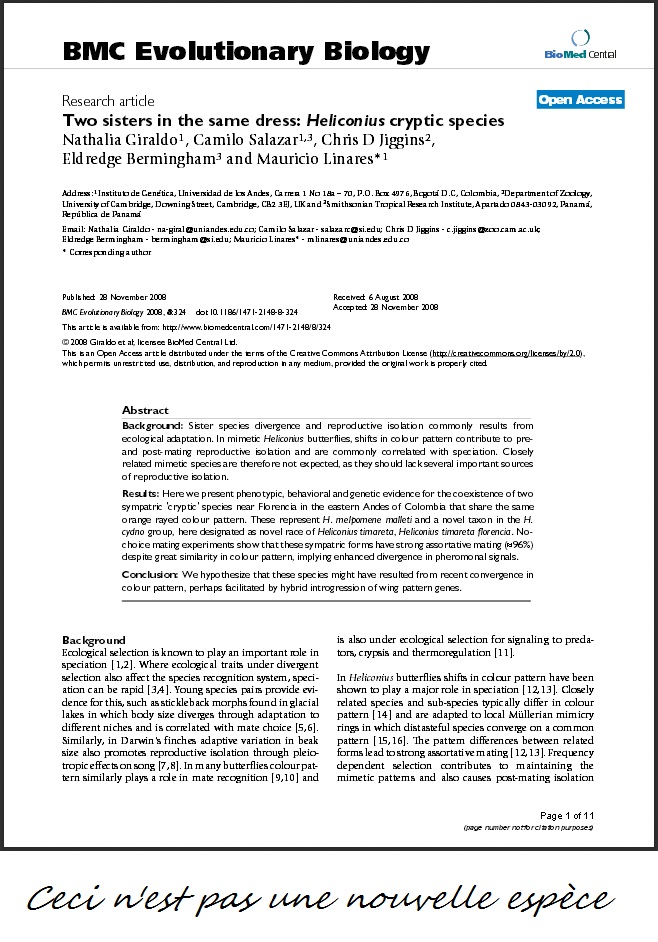 It’s always pleasant to find examples of when open access allows researchers to more readily find articles. Sometimes they don’t like what they find.

This week, we were surprised to come across a publication mentioning BioMed Central’s role in recent changes to the way in which new species are recognised. Much has been written about recent updates to the International Code of Zoological Nomenclature (ICZN) allowing electronic publication of the scientific names of animals, and for a bit of background we can do no better than direct you towards an interview with Frank Krell, Commissioner of the International Commission on Zoological Nomenclature and Chair of the ICZN ZooBank Committee, published in BMC Evolutionary Biology.

These efforts to move the field of taxonomy into the 21st century have been widely welcomed –and rightly so—yet opposition still remains in some quarters. None more so, it would appear, than from Alain Dubois and colleagues, the authors of a recent open access* article in the journal ZooTaxa, outlining what they perceive as inherent problems with updates to the code.

We should point out that BioMed Central has always cooperated with the ICZN and prior to the recent amendment printed five copies of each species’ description and deposited them in suitable repositories as outlined here, in compliance with the (then) Code. But, as would befit researchers who study the minutiae of life, it appears that the devil is in the detail.

The 94 pages of ensuing text are difficult to distil into a pithy blog post, but their arguments seem to centre around a point of semantics. Because electronic publishers like BioMed Central do not print formal copies of their journals, the authors argue that species descriptions published by these journals are technically “unavailable”. When contacting our customer services team about the possibility of purchasing a printed version, they were not convinced that our suggestion of simply downloading the PDF and printing it for free themselves constituted making the article available:

“when contacted to inquire whether paper versions of works published by BMC can be obtained, the reply from the publisher is clearly “No””

We should like to clarify that not only is anyone, anywhere, able to obtain paper versions of works for themselves (should they have access to a printer), that we even offer a reprint service for anyone wishing for us to print articles on their behalf.

The authors give examples of articles that were faithfully printed by our Editors and posted to suitable repositories. However, they argue that because these copies were printed in-house, presumably rather than in bulk, that this makes them “unavailable”. Our adherence to the rules has been discussed often over the years with ICZN and this procedure had seemed to be to their satisfaction. Indeed all our publications are permanently available not only from BioMed Central’s site but also deposited in a growing number of other, independent digital archives as a matter of course.

They even go to the trouble of reproducing personal correspondence, and most troublingly personal signatures, from our Editors in an extensive appendix without seeking permission. If only they had taken as much trouble in contacting these same Editors, even as a courtesy.

As a forward-looking publisher, we have been working closely with parties associated with ICZN who are genuinely interested in ensuring that communicating taxonomic findings is fit for purpose in an electronic age. We certainly welcome an open and reasoned discussion about how we as a publisher can help in meeting these goals, and we are very much in favour of a sensible scientific discussion.

Phrases such as “the publishers of these contemptible journals” (pg80) are not constructive if indeed the authors are seeking to find a solution that works for the whole community, including the many researchers who have published in online-only journals, many of which have established themselves as well-respected journals (e.g. Frontiers in Zoology, EvoDevo, and Parasites and Vectors, BMC Plant Biology and BMC Evolutionary Biology). These researchers presumably do not share the authors’ concerns that “online publication is a very recent phenomenon, the future of which is unknown” (pg79).

Discussion of online-only, open access publishing in these terms hark back to the beginnings of the movement. The permanence of the scientific record is a paramount concern to every scientific field, and indeed concerns about this were often expressed in the past. The careful attention to these concerns by BioMed Central, PLoS and others, and the existence of numerous independent digital literature archives has long since put them to rest.

Many of the issues raised in this article could have been easily clarified by our in-house Editors, who have worked closely with the ICZN over a number of years. Specifically, statements such as: “BMC (founded in 2000) is proud to produce 257 open access online periodicals and its website provides very detailed instructions and advices to their potential authors in many domains—but not a single one about nomenclatural Rules” (pg 81), are somewhat baffling in light of what we believe to be a very simple-to-access Editorial Policies statement on describing new taxa.

We think that raising legitimate concerns over perceived ambiguities in the interpretation of the Code is a worthwhile activity, and are certainly keen to support any future effort working toward this goal. We recognise that there may be teething problems in the transition to new systems and updates, and we understand the reticence of less forward-looking researchers to the prospect of change.

Despite this, there may be some genuinely interesting issues to discuss within this lengthy piece. We look forward to continuing to work with ICZN in the future, to resolve any issues that they feel merit correction.

For questions, queries or comments, please join in the discussion below. And for specific enquiries you can easily find the contact details of our in-house Editorial teams on our journal homepages – you just have to make the effort.

Dubois’ paper was way OTT, and the valid points are buried in too much “other stuff”. At any rate, there is a simple system in place for new names in e-only journals, which publishers really must follow. Namely, preregistration of the article in ZooBank, with the ZooBank identifier for the article quoted in the article itself. The article should also be indicated to be in its final form (version of record), and this date noted in the article itself. The new names (descriptions thereof) must not be relegated to “supplementary files”. If this protocol becomes standard, then there will be no problem.