Analysis of 19th century harvest records from an isolated Swedish community reveals that female grandchildren have an increased risk of death from heart disease if their paternal grandmother experienced a drastic change in food availability in their childhood.

Staying stress free, keeping fit, eating well – these are all things we’re advised to do to keep our hearts healthy. But have you ever thought about whether what your parents and grandparents did could be affecting you too? New research has suggested that the diet experiences of even your grandparents could have an effect on your own health.

Food shortage and famine are clearly not good for you. Associations between higher risk of cardiovascular disease and stroke among adults who suffered famine or hardship as children are well known and these effects may also cascade down to their unborn offspring’s health.

It seems reasonably intuitive that stresses to a developing foetus are rarely good news, but what about beyond the first generation? What about what your gran ate? Finding answers to these questions is tricky, since dietary diaries are rarely kept across generations. But datasets do exist where scientists can infer diets from way back when.

One such unique cohort is from a remote community in Northern Sweden called Överkalix. Fortunately for researchers interested in studying “transgenerational effects” on health, diligent 19th century record keepers kept detailed accounts of  harvests, births, deaths and family trees – just the kind of things that 21st century scientists need to figure out how much of what we are now reflects what our grandparents ate way back then when affects us now. 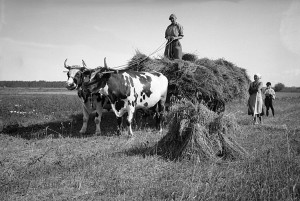 In the 19th century, the town of Överkalix was largely isolated from most of Sweden during the winter months, as it lacked a rail line linking it to the southern half of the country. Freezing of the Baltic sea during the same period meant that communities in this area were totally reliant on the success of the previous year’s food harvest, since there was no route for supplies to get through.

Detailed family histories kept by the parish registry have meant that family lives can be traced back to specific times in the community’s history, creating a high-quality pedigree in which the shock of moving from feast to famine, or vice versa, can be followed across generations.

In a new analysis published today in BMC Genetics, a collaboration of researchers from three universities in Sweden and one in the UK have done just that, pinpointing five separate occasions in the 19th century when harvest quality altered drastically between consecutive years.

Tracing back individual family lines across two generations, they find a striking effect on the cardiovascular health of one subset of grandchildren in particular — daughters whose grandmother (on their father’s side) had experienced one or more episodes of drastic nutritional change before puberty were at a much greater risk of heart-related death compared to those whose grandmothers had not. In fact, no other groups of great-grandchildren among this cohort had a comparable risk to their cardiovascular health, regardless of whether their grandparents had experience the drastic change in food-supply or not.

Importantly, the researchers focused primarily on the magnitude of change in food availability, rather than the direction of change. That is, regardless of whether feast-followed-famine or famine-followed-feast, women on the paternal grandmothers’ side were affected most.

So what could be driving these effects, and why should they be so targeted to just one line of female grandchildren? The authors speculate that metabolic changes transmitted as epigenetic marks on the germ-line X chromosome could be responsible. In an interview with Biome magazine, two of the study’s authors, Lars Olov Bygren and Marcus Pembrey explain:

“Females have more routes than males through which exposure-induced physiological or metabolic changes can impact on the next generation.” However, they also caution that the picture looks likely to be complicated: “More than one mechanism is likely to be employed in the chain of events that make up a transgenerational response.”

Although these mechanisms remain speculative in the absence of molecular analysis, they add valuable data to the complex picture that is emerging on the effects of nutrition and stress across multiple generations. Lab-based experiments in plant and animal models are probing deeper into the molecular mechanism that underpin these responses — in some cases finding effects that cascade as far down as seven generations of non-exposed individuals.

The Överkalix cohort also adds to a number of other valuable, ongoing datasets involving human populations, mostly arising out of great hardships from the recent past. The Second World War in particular has provided several harrowing, real-life experiments on the effects of malnutrition in humans. The three-year siege of Leningrad and the Dutch Hunger Winter of 1944-45 have both shed light on the inter-generational effects of stress, whilst more recent programs such as the Avon Longitudinal Cohort of Parent and Children (ALCPC) has been following individuals born in the 1990’s, and is already yielding valuable data on smoking-related transgenerational effects on childhood growth.

Of course isolating the relative effects of different factors from these unique natural-experiments brings with it difficulties that could normally be controlled in lab-based experiments. Bygren and Pembrey explain:

“Nutritional crises are most often linked to personal, family and society burdens. For the coming studies it will be important to discern the attributions of the two general factors. Famines are likely to be associated with stress, which can induce transgenerational response at least in experimental animals.”

Results from Överkalix and other cohorts are beginning to build a complex picture of human health across the generational divide, in which there is still much to be resolved:

“This type of confounding can only be resolved with many more human transgenerational studies including studies of stressful events not associated with famine”.