Deregulation of epigenetic profiles has been described in several human pathologies, including complex diseases (such as cancer, cardiovascular and neurological diseases), metabolic pathologies (type 2 diabetes and obesity) and imprinting disorders. Deleterious epigenetic profiles could be a consequence of mutations in the “writers” “erasers” and  “readers”, that is to say, dysfunctional enzymes that are responsible for putting in and out the epigenetic marks and for their cellular interpretation. As the most studied example, more than 40 de novo recurrent disruptions of several genes encoding components of the epigenetic machineries are typically observed in many tumors [1]. 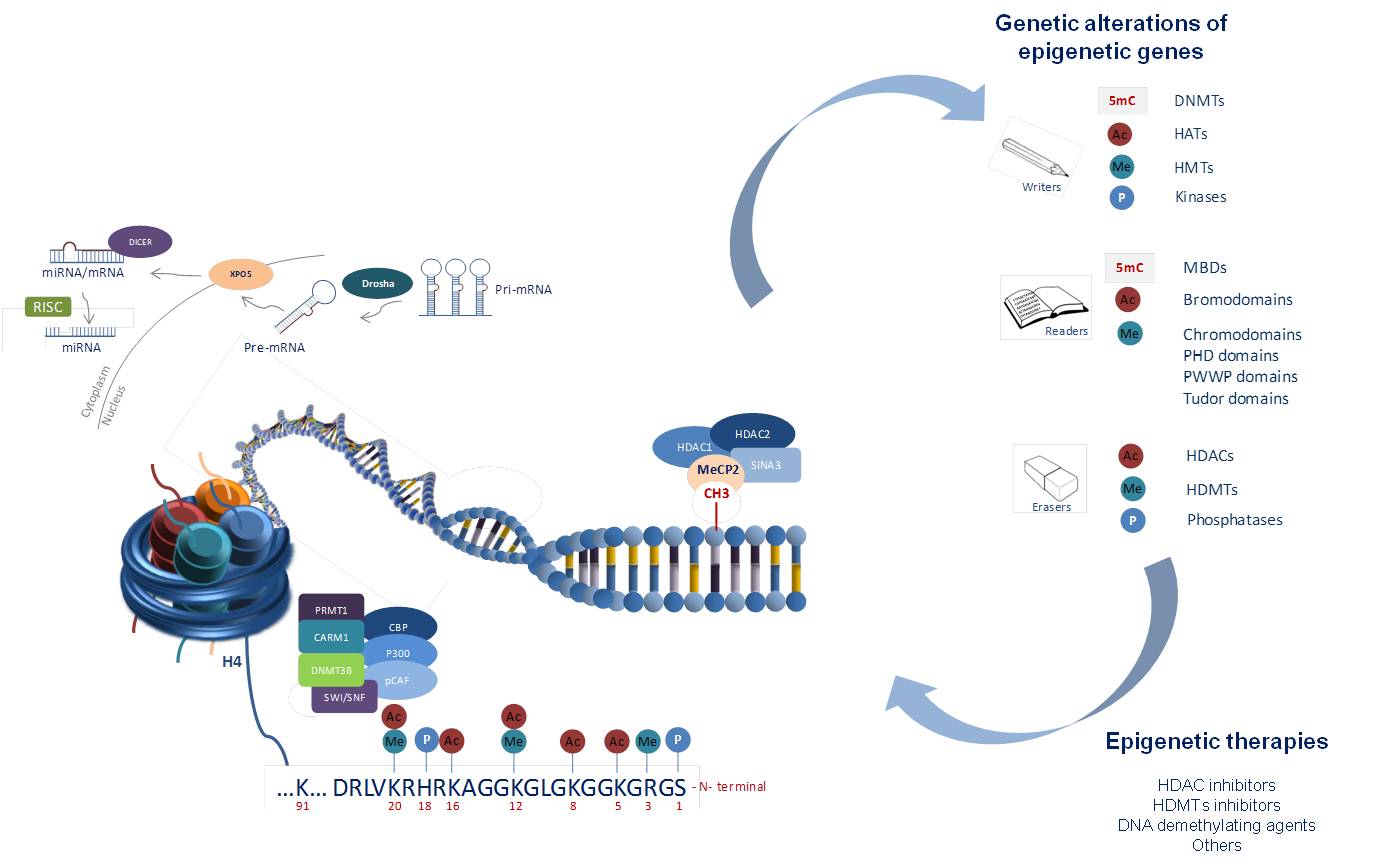 However, in recent years we have accumulated some evidence about the role of germline mutations of epigenetic modifiers and their contribution to the development of human diseases. Most of these disorders are included under the term “rare diseases” – any disease that affects a small percentage of the population (although there is no general consensus about what “small percentage” exactly means). Homozygous mutations affecting epigenetic enzymes are lethal reflecting the vital role of epigenetics in normal development and differentiation. However, an increasing number of heterozygous mutations during early development have been identified, especially in diseases affecting intellectual disability [2]. The nervous system represents an immensely complex structure in which the orchestrated control of gene expression (partially due to epigenetic control) faces its major challenge. Some interesting data: 3 of 4 genes are expressed in the brain [3], and it expresses more alternatively spliced transcripts [4] and miRNAs [5] than any other tissue. The complexity of the nervous system makes it especially sensitive to epigenetic disturbances, and consequently, many mental disorders are caused by mutations in the epigenetic machinery.

Until now, we had identified genetic mutations that could change the epigenetic patterns; but we still do not understand which are the altered putative downstream genes (epigenetically regulated) that result in specific clinical phenotypes. Most importantly, we are still in the infancy of the understanding of how such epigenetic defects (potentially reversible) could provide a target for therapeutic intervention. The possibilities have only just begun to be explored in human patients, but the basis of this therapy has been confirmed in animal models. Although there are not yet specific drugs against many of the enzymes involved in epigenetic control, there are some promising examples of the benefits of such treatments in the literature: treatment with HDAC inhibitors, such as SAHA or TSA, ameliorate deficits in synaptic plasticity and cognition in cbp +/- mice modeling Rubinstein-Taybi syndrome [7]; HDAC inhibitors enhance memory formation and neuronal postnatal formation in Rett syndrome experimental models [8] or the delay of neurodegeneration and tauopathy in a mouse model of Alzheimer’s disease through the activation of SIRT1 by means of resveratrol treatments [9]. The understanding of the contribution of epigenetic change to rare disorders and common neurological disorders will hopefully provide us with better molecular tools for an improved diagnosis, prognosis and therapy of these patients in the future.