Some of the largest angiosperm families consist of species with bilaterally symmetrical (zygomorphic) flowers (e.g. legumes, daisies and orchids). The very large sizes of these families is explained by some as a consequence of an association between this pattern of flower morphology and increased pollinator specialization and speciation rates. Studies of the specific genetic basis of bilateral symmetry have suggested that zygomorphic development has evolved independently in these lineages, caused by the parallel recruitment of specific developmental genes causing the evolution of a convergent trait. 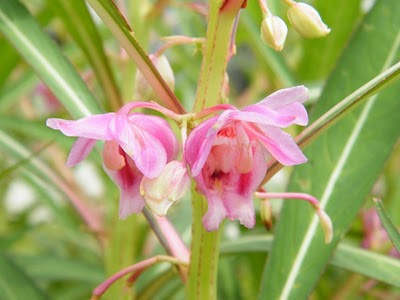 In research published in EvoDevo last week, Preston and Hileman tested the non-exclusive hypotheses that changes in TCP and B-class gene developmental function underlie flower symmetry evolution in Commelinacae.  The authors proposed three predictions of the hypothesis, which were tested using gene expression and  micromorphological data in order to further explore the evolutionary developmental origin of zygomorphy. They investigated the effects of changes in developmental genetics on early and late stage development of flowers, and how this affects the formation of  bilateral symmetry across three morphologically diverse species.