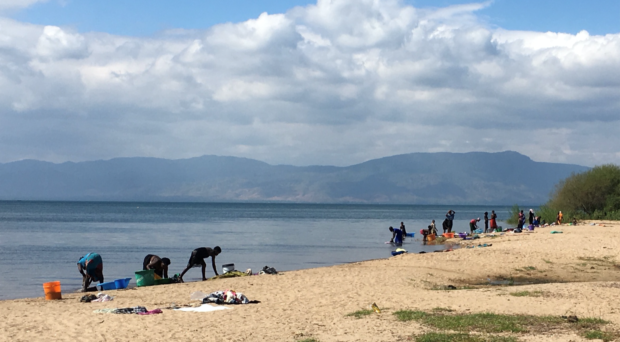 Our recent surveys in Malawian school children have confirmed that an outbreak of intestinal schistosomiasis in Mangochi District, Lake Malawi, is occurring.

Schistosomiasis, of which there are two forms, intestinal and urogenital, is a neglected tropical disease responsible for significant morbidity and mortality across sub-Saharan Africa.

The perpetual infection cycle that exists in many aquatic habitats and in key disease hotspots, such the communities surrounding Lake Malawi, is hard to break, and the balance between each form of the disease is changing significantly. Control initiatives help to break disease transmission, often through mass drug administration (MDA) of praziquantel within preventive chemotherapy strategies. However, ecological developments in or around freshwater bodies can lead to unanticipated changes in schistosomiasis, from emergence to outbreaks and chronic endemicity.

Urogenital schistosomiasis, classically caused by the Schistosoma haematobium parasite, has been endemic in Lake Malawi for many years, as compatible snail populations of Bulinus spp. are found along its shoreline. Accordingly, the mainstay control method of the Malawian National Control Programme has been annual MDA in schools situated in high-risk transmission zones.

By contrast, following the unexpected discovery of another snail host species, Biomphalaria pfeifferi, alongside first confirmation of local S. mansoni transmission (responsible for intestinal schistosomiasis) in Mangochi District (southern tip of Lake Malawi) in 2018 (read previous Bugbitten blog), the threat of increased transmission and morbidity associated with both forms of schistosomiasis in Mangochi District now exists.

Implications for morbidity in Malawian children

Frank morbidity markers of schistosomiasis, such as red urine (haematuria from S. haematobium), can be patently obvious in school-aged children in endemic regions such. The water, sanitation and hygiene (WASH) measures needed to break transmission cycles in low-income settings do not commonly exist.

Adding to these levels of haematuria, we have noticed that co-infection with S. mansoni appears to augment this pathology. Significant urogenital morbidity persists in Mangochi District – all thirty children sampled from one particular school (Ndembo) in our 2019 survey tested positive for micro-haematuria on urine dipsticks, indicative of chronic urinary tract inflammation. Meanwhile, faecal-occult blood testing was used to highlight morbidity in intestinal schistosomiasis. Our findings show that the general prevalence of blood in stool cannot now be overlooked, nor the additional impact S. mansoni has on increasing inflammation.

Links between both of these early morbidity markers and their associated forms of schistosomiasis are already widely reported in endemic areas and were detected in our study. They likely predict that more cryptic disease, as best detected by ultrasonography (e.g. liver fibrosis), is already underlying and set to become more apparent in these communities in future.

Another important aspect of the dynamics of S. haematobium and S. mansoni co-infections is the behaviour of the adults worms themselves, where they may appear in ectopic egg-laying sites. For instance, when one species of schistosome is invading into the endemic area of another, cross-specific worm pairs may arise, exemplified by the excretion of S. mansoni eggs in the urine (see photo) or S. haematobium eggs in the stool.

The current situation in Lake Malawi, Mangochi District shows similarities to that of the Senegal River Basin in the late-1980s. Previously non-endemic for S. mansoni, an outbreak occurred after an initial first case of infection was reported at Richard-Toll, not long after the building of the Diama dam. The transition from emergence to outbreak occurred rapidly.

More recently, the emergence of schistosomiasis in Corsica in 2014, as described in a BugBitten post, was an example of how hybridising schistosomes can pose a significant threat to public health. The island, located off the coast of Southern France, saw S. haematobium parasites hybridise with S. bovis, a livestock parasite. It is worthy to note that new hybrid schistosome combinations are also appearing along the Mangochi District shoreline of Lake Malawi, questioning the species integrity of S. haematobium itself.

Previous outbreaks, such as those in Senegal and Corsica, highlight the importance of timely public health intervention. Though WASH measures can provide a long-term solution, these approaches are very challenging on great lake shorelines. Simply put, safe water facilities and sufficient latrines do not exist, and improvements would be slow to bring about disease control.

Therefore, initial recommendations include stepped up preventive chemotherapy (twice a year or more with improved community access), and increased surveillance (including malacological) to pinpoint high-risk transmission zones. Livestock surveillance could also be crucial in driving our understanding of hybrid schistosome dynamics in Malawi.

Unfortunately, the devastating timing of the coronavirus disease 2019 (COVID-19) pandemic has resulted in MDA programmes being put on hold. While the COVID-19 crisis poses are far more immediate threat to public health, we hope that timely access to preventive treatment will be safely available soon. Angus is an academic trainee doctor working in Hull, UK. Having graduated from Liverpool Medical School, and with a Master’s degree in Biology and Control of Parasites and Disease Vectors from Liverpool School of Tropical Medicine (LSTM), Angus’s interests lie in infectious diseases, particularly neglected tropical diseases.

Hamish is a trainee doctor in Sheffield, UK. His studies included a medical degree at Liverpool Medical School and a Master’s degree in Tropical Disease Biology from the Liverpool School of Tropical Medicine (LSTM). During his time at LSTM, Hamish worked on schistosomiasis research in Malawi.

Sekeleghe Kayuni is a medical doctor working with MASM Medi Clinics Limited in Blantyre City, Malawi and currently a Commonwealth PhD Scholar studying at the Liverpool School of Tropical Medicine and University of Liverpool. His twitter account is @sekekayuni.