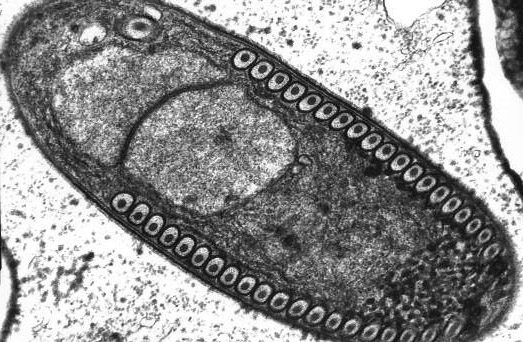 The mosquito Anopheles arabiensis (a member of the Anopheles gambiae species complex)  is an efficient vector of malaria in Sub-Saharan Africa. Its habits are versatile, feeding indoors and outdoors on both humans and animals. Larval habitats are also varied. These features make it less amenable to control by methods such as indoor spraying, use of insecticide treated bednets or destruction of breeding sites. Additional approaches are required to stop this vector from transmitting malaria.

It is possible that help is at hand.
A naturally occurring biocontrol agent, that inhibits the development of the malaria parasite in this mosquito, has recently been reported. This is the work of a team based at the International Centre of Insect Physiology and Ecology (ICIPE), in Kenya, and colleagues in the UK. Their recent publication in Nature Communications describes the road to this exciting discovery. It involves a microsporidian.

Microsporidia
These are unicellular spore-forming parasites that are now recognised as fungi, or as being related to fungi. All major animal groups harbour them, particularly insects. They spread horizontally, via spores which are ingested by a new host, but many also undergo vertical transmission to the next generation, via infected eggs (known as transovarial transmission).

Discovery of Microsporidia MB
The Kenya based group have identified a new microsporidian in An. arabiensis mosquitoes collected from houses and barns in widespread areas across the country. Phylogenetic analysis showed it to be related to a newly discovered species infecting non-biting midges and to be in a different clade of microsporidia from those previously found in mosquitoes. They called it Microsporidia MB. The prevalence of these microsporidia increased at the end of rainy seasons.

Transmission of Microsporidia MB
Gravid mosquitoes, and the larvae they produced in the laboratory, were screened for the presence of Microsporidia MB. Females were found to transmit the symbiont to their offspring with 45-100% efficiency. Examination of mosquito ovaries using fluorescent in situ hybridisation showed their presence in the posterior end of developing egg chambers, thus confirming that transovarial transmission was occurring. As Microsporidia MB spores were found in mosquito midguts, the authors suggest horizontal transmission is also likely to occur, probably in the water at the larval stage.

Sex ratio distortion and fitness costs
Many transovarially transmitted microsporidia cause distorted sex ratios in favour of females as this is the sex that passes the symbiont on to the next generation. After rearing larvae to adults, and comparing the number of males and females produced by infected and non-infected females, they determined that there is no sex ratio distortion caused by this species.

Unlike microsporidian infection in other mosquito species, Microsporidia MB did not adversely affect the number of eggs laid by An. arabiensis females. Neither did it affect adult longevity. Infection did not result in detectable fitness costs.

Microsporidia MB and Plasmodium
Recognising that other symbionts can inhibit the development of pathogens in their mosquito hosts (e.g. Wolbachia), the researchers raised progeny from field-collected mosquitoes to test whether this symbiont inhibited malaria development. Mixed groups of offspring from Microsporidia MB +ve or -ve mothers were fed blood from donors infected with the malaria parasite, Plasmodium falciparum. After 10 days, molecular analysis was used to determine the presence of Microsporidia MB and of oocysts or sporozoite stages of the parasite.

A strong negative correlation occurred between the presence of Microsporidia MB and the malaria parasite.

Malaria parasites develop as oocysts on the midgut of mosquitoes, then release sporozoites that travel through the thorax to the salivary glands 8-14d later. To determine which stage of the parasite’s development was impaired, a quantitative PCR assay (qPCR) was undertaken on the midgut or thorax / head compartments 10 days after blood-feeding.

RNA sequencing was carried out on mosquito midguts and ovaries to determine the effect that Microsporidia MB had on gene transcription. In comparison with non-infected mosquitoes, most of the genes that were upregulated were involved in digestion or immunity. The researchers hypothesise that impairment of Plasmodium transmission by Microsporidia MB could be linked to immune priming.

Other microsporidia have been reported to infect anopheline mosquitoes, but they impose fitness costs on the mosquito and only cause a modest reduction in Plasmodium transmission. In contrast, the authors of this report propose that Microsporidia MB could be added to the growing list of transmission-blocking microbes that could be used in future malaria control strategies. This is because of its efficiency in blocking the development of oocysts, the lack of fitness costs and, finally, because it has two means of dissemination through mosquito populations, spore-formation and transovarial transmission.