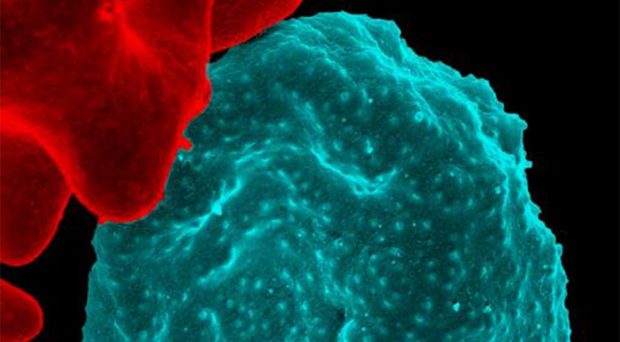 The best means to attack the parasite

Malaria parasites enter the body with the saliva that female mosquitoes inject during blood feeding. This stage of the parasite, the sporozoite, rapidly makes its way to the liver where it multiplies inside the liver cells to form merozoites. When these merozoites enter the blood stream and invade red blood cells (RBC) the parasites transform into a feeding stage, the trophozoite.

Here, most of the parasites undergo asexual division to produce more merozoites that are released when the RBC ruptures and go on to invade further RBCs.

Two of the most promising malaria vaccine candidates are directed towards the sporozoite stage, but sporozoites are only exposed to the host’s immune system for a few minutes. Each cycle within the RBC lasts 2-3 days, but, hidden within the cell, the trophozoite itself cannot be detected. Parasite antigens that could be recognised are those that the trophozoite exports to the outer surface of the RBC membrane. As Plasmodium undergoes multiple cycles of RBC infection there is time for antibodies that recognize these proteins to be generated in infected people. Several of these, are known as variant surface antigens because they undergo clonal antigenic variation. However this variation makes their use as vaccine candidates problematic. Could there be another, more stable surface protein, that could be a novel vaccine candidate?

An interdisciplinary team comprising 33 members, led by Jonathan Kurtis of Brown University Medical School (seen explaining his goal in this video), set about finding out.

In a recently paper published in Nature the team report their success.

Initially they identified genes encoding parasite proteins that were recognised by antibodies found in the plasma of Tanzanian children that were relatively resistant to malaria, but not in children most susceptible to the disease. They focussed their attention on one of these proteins that they named P. falciparum glutamic-acid-rich protein (PfGARP).

The PfGARP gene is only expressed in the early trophozoite stage of the parasite life cycle and immunolocalization studies showed that PfGARP is located on the outer surface of trophozoite-infected RBCs.

To confirm that this protein was immunogenic they used a recombinant protein, rPfGARP-A, to immunise mice with the immune-relevant region of PgGARP and found it was immunogenic.

The growth of several strains of P. falciparum was inhibited by 94-99% when they were cultured with anti-PfGARP-A antiserum from mice or humans. As a further confirmation of the effect, PfGARP knockout parasites were constructed and cultured with anti-PfGARP antibodies. The killing effect of the antibodies was completely lost in comparison with their effect on wild-type parasites.

As early as 1997 pyknotic trophozoites were associated with chloroquine-treated cultures and their appearance recognised as indicating that they may be undergoing programme cell death (PCD).  Several features indicative of PCD were later identified in both RBC stages of the parasite and, by my own research group, in ookinetes (a mosquito stage of the life cycle). They have also been seen in infected RBCs in a high-density culture environment.

The team observed many features of PCD when parasites were incubated with anti PfGARP antibodies, namely:

No other anti-malaria antibodies have been observed to initiate this self-destruct programme. The authors of this paper suggest PfGARP might respond to parasite or host factors via the initiation of a PCD pathway, and this may regulate the level of parasitaemia.

Are PfGARP antibodies protective in the field?

To determine whether the presence of anti PfGARP antibodies in plasma was indeed associated with less severe disease, the researchers followed their Tanzanian cohort of young children and, in addition, they examined plasma from a group of adolescent and mature Kenyan males.

The presence of PfGARp IgG antibodies predicted a reduced risk of severe malaria in the study children and reduced parasitaemia in both the children and the Kenyan males.

These predictions, and the group’s finding that there was minimal sequence variation in the immune-relevant sequence of the PfGARP gene, suggested that vaccination with PfGARP might generate antibodies that offer protection against malaria.

To test this exciting prospect, the researchers had to turn to an Aotus monkey / Plasmodium model because PfGARP is only present in Plasmodium species that infect primates. Using two different immunisation strategies (an mRNA-based or a recombinant-protein-based immunogen) they found that immunised monkeys did develop anti-PfGARP antibodies. Even better, after heterologous challenge with P. falciparum, immunised monkeys had lower parasitaemia and marked protection compared with controls.

This comprehensive study has identified PfGARP as a promising new vaccine candidate that, the authors suggest, could be used in conjunction with vaccines targeting other stages of the parasite in a multi-stage, multi-antigen approach.