Three weeks ago, on September 13, all major news outlets in the United States were filled with coverage of Hurricane Florence as it approached the Carolinas. Thinking about the aftermath, I started to worry about the potential of increased mosquito production and disease transmission. Being in Washington State, I chose the most natural solution: I shouted the question out on Twitter for all to see. I received a prompt reply from Vector Disease Control International (VDCI) and the Southern Regional Center of Excellence in Vector-borne Disease, located at the University of Florida. Their consensus was that it is unlikely that there will be a large increase in disease transmission (e.g. West Nile), this late in the season, but there might be a large increase in nuisance floodwater mosquitoes, which will necessitate a response.

It turns out that they were exactly right. A couple days ago I started seeing reports of swarms of particularly large mosquitoes attacking people in inundated areas of the Carolinas. The first reports started to appear around September 24, roughly a week after the flooding caused by Florence started. Since then, numerous media outlets have picked up the story, ranging from local to national media, from serious to downright conspiracy theories. So what’s going on, and do we have to worry about disease transmission? 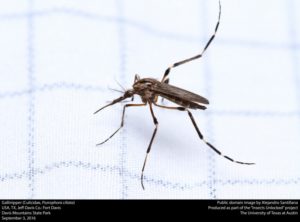 While there are 176 mosquito species that inhabit the United States, only a handful of those are responsible for the majority of disease transmission. The mosquito responsible for the flurry of media coverage in the last few days is Psorophora ciliate, or otherwise known as the gallinipper. The origins of this term are obscure, but it has been used for this particularly large and aggressive mosquito at least since the 1800s. Adults of this species can grow to a wingspan of 6-7 mm, to roughly 20 times the size of some smaller mosquito species. Having this large size, they have proportionally large proboscis, which they can use to feed on large mammals, as they are able to feed through the hides of cattle. They can grow this large from eggs within a week, because their larvae are one of the few mosquito species that predates on other mosquito larvae or even on tadpoles sometime. They are considered floodwater mosquitoes because adult females can lay their eggs on damp soil, where the eggs can dessicate and survive over the winter. Subsequent flooding in the spring and summer month activates them, and they hatch to continue their life cycle. They are a native mosquito species of the southeastern US, their distribution ranging from western Texas to Florida and all the way up to Maine. However, they are typically rare, and large swarms such as documented on the videos on social media are exceptional. Fortunately, while this mosquito has been found to be infected with some arboviruses, it is not considered a competent vector for any of the disease we usually worry about such as West Nile virus.

While it’s reassuring that the bite of this mosquito will not make people sick, their aggressive biting can hamper already difficult recovery efforts. That is why Roy Cooper, the Governor of North Carolina, ordered $4 million of funding for mosquito control efforts in the 27 counties under a major disaster declaration in the aftermath of Hurricane Florence. Horry County in South Carolina also authorized to spend $3 million in emergency mosquito control the ‘gallinipper’ and other mosquitoes. Fortunately, eggs of this mosquito all hatched at once as the floodwater rose, so as floodwaters recede, and the weather cools, there shouldn’t be another wave of them coming this year. However, the adults will lay their eggs, which will be staying in the soil, waiting for another big flood coming in the future. In fact, with climate change increasing the frequency and intensity of extreme weather events, we might have to get more familiar with the gallinipper mosquitoes – in an unpleasant way.