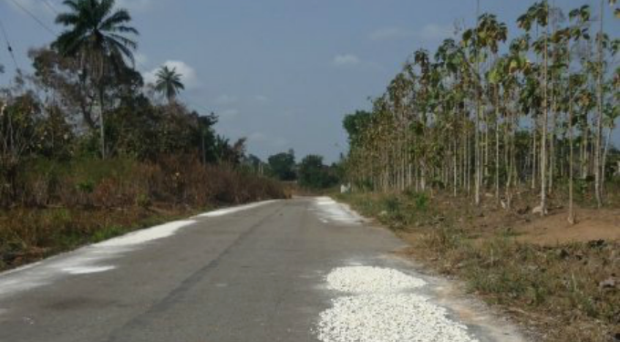 Cassava flour spread on the ground for drying where it easily can be contaminated by rodents (Photo: Anja Choon)

Since August 2015, Nigeria is experiencing an outbreak of Lassa Fever (LF), with a high number of cases and deaths as well as a large geographical distribution. At the beginning of February, statistics by the Nigerian Center for Disease Control showed 175 confirmed and suspected cases, including 101 deaths. Of these, only 83 cases and 58 deaths are confirmed, according to the Nigerian Minister of Health. The outbreak has spread widely; according to WHO, there have been cases in 19 states. A (possibly outdated) map showing confirmed cases can be found at Lassa Alert.

Lassa fever, endemic in Nigeria and other West-African countries, is an acute viral haemorrhagic illness, which is mainly transmitted by rodents. Symptoms include fever, vomiting and diarrhoea. In severe cases, the disease also causes bleedings. It is estimated there are 300,000 cases and 5,000 deaths each year.

There are a several factors that have shaped the current and previous outbreaks. I will discuss some of these factors below.

Past studies showed little awareness of rodents as vectors for LF.  Even in a community where LF is endemic, only 36% knew about the disease, and of these 51% could identify rodents as the source of infection.

This seems to have changed over the last few months due to the media’s focus on the role of rodents in the transmission of LF. Newspaper articles with titles such as “Physician advocates war against rats” and “Lassa fever: 4,400 rats killed in six Lagos markets” are examples of this new (but probably only temporary) interest in rodent control. As a result, 9 out of 10 mobile-phone owning Nigerians are now aware that “rat infected food stuff” is a source for LF infection, according to a 2016 poll by NOI Polls and EpiAFRIC.

A previous outbreak of LF in Abakalaki, Ebonyi State, Nigeria, in 2012 started with a single index case, for which LF only was confirmed post-mortem. Six health workers were infected during surgery on the index case.

Inadequate hospital infrastructure and equipment are likely to have caused the infection of these health workers. At the onset of the outbreak, there was no isolation ward in the hospital where the index cases had been treated. The next suitable laboratory was located about 300 km away, which impeded testing for LF. Another issue that facilitated the human-to-human transmission of Lassa fever in Abakalaki was the insufficient availability of (quality) personal protective equipment at the hospital.

About two years later, during the Ebola outbreak in Nigeria in October 2014, a patient with LF presented at the University of Nigeria Teaching Hospital in Enugu (UNTH), Enugu State Nigeria, and again a Nigerian health facility was ill prepared for a case of LF. Due to the lack of LF diagnostic and isolation facilities at UNTH and difficulties to obtain ribavirin in Enugu State, the patient had to be transferred to the Institute of Lassa Fever Research and Control in Irrua, Edo State, where he eventually died. (The distance between Enugu and Irrua is more than 200 km.)

Nigerian health workers do not necessarily have an adequate knowledge on how to prevent nosocomial (hospital acquired) infections. While handling the 2014 LF case in Enugu, “a significant number of health workers” failed to use appropriate personal protective equipment (PPE). This may be to a lack of PPE at UNTH (at the time) or to the health workers’ ignorance of what is appropriate.

A 2011 study revealed significant knowledge gaps concerning LF among primary care providers in a LF endemic suburban community of Edo state. Though the majority of the participating health workers were aware of the necessity to use gloves when dealing with suspected LF cases, many did not know that they should also use additional protection. Moreover, the majority was unaware that LF often is not accompanied by readily observable symptoms. This puts the health workers, their families and the wider community at risk of secondary infections.

In Nigeria, dealing with any outbreak is hindered by several other issues. Frequent strikes in the health sector reduces the already limited number of available health workers. Distrust in health facilities leads to patients with (suspected) LF, other patients and even health workers to “escape” from health facilities and potentially spread the disease further. False information, such as that the Yoruba are genetically immune to LF, can have fatal consequences (I especially think of the deaths caused by the claim that drinking salt water protects from Ebola). Last but not least, LF shares symptoms with other diseases that are found in Nigeria. Hence, it is often misdiagnosed as influenza, typhoid or malaria.

Editor at BugBitten
As a medical student who has lived in Germany, the UK, Nigeria, Spain and the US, Anja Choon has a deep interest in tropical health. So far, she worked for the Red Cross, Pro Health International, Nigeria Health Watch, the University of Münster and the School of Oriental and African Studies. In a former life, she was a language documenter and gained a PhD in Field Linguistics. She tweets from @Bolanja.