Christmas Dinners All Round – Disease Spill Threats From Agricultural Intensification In The Tropics.

The world’s population is growing in number and in wealth. As standards of living rise in many of the world’s most populace countries, so too does a demand for affordable meat and for habitable 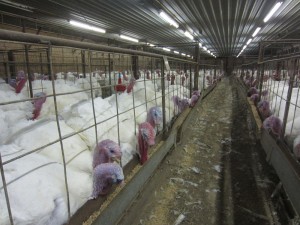 land. Partial reconciliation of these conflicting demands has been possible through the development of high density farming methods, most notably of poultry and of pork. Known as industrial livestock production (ILP) or factory farming, these methods do not rely on large amounts of arable land for grazing. For many years now, most in Europe and North America have enjoyed Christmas dinners with affordable centre pieces including Turkey, Ham, Chicken and Sausage derived in whole or in part from livestock reared in this way. Outside of Asia and the OECD, however, such livestock production methods are comparatively rare and only recently introduced ; but, it is clear that this is something that is in the course of changing rapidly.

The hazards associated with high density livestock production are by now well-rehearsed. With respect to infectious disease, keeping livestock at high density inevitably promotes high pathogen transmission rates. The livestock are also selectively bred for meat production and correspondingly have limited genetic diversity, making such livestock populations even more susceptible to infection. As a result anti-infective 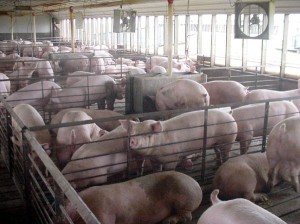 treatments are widely used where they are available, which is to say that ILP is largely reliant on the widespread use of antibiotics and antiparasitic agents. It is widely recognized that the use of anti-infective drugs in this way may not be sustainable since the pathogens being controlled develop resistance faster than new anti-infectives are being produced. A trend which will only accelerate as industrial livestock production becomes more globally adopted. In response to these concerns is a growing trend to develop new vaccines and to vaccinate rather than to drug treat livestock where vaccines already exist.

A particular concern associated with ILP is that animals kept in this way can act not just as reservoirs but actually as amplifiers of infectious disease driving outbreaks and the emergence of new epidemics through spill-over and spillback into local wildlife and/or into human populations. For parasitic and viral diseases which lack effective treatments this is of particular concern. Where the disease is one that causes pathology to the livestock such as avian influenza mass culling is often implemented.

Where the livestock themselves appear unaffected by infection culling can be contentious even where the disease in question is potentially zoonotic. Where livestock is acting as a reservoir for wildlife disease, spillover effects are likely to be unnoticed and may be seen as acceptable collateral damage even when they are.

Livestock zoonoses represent a large component of the world’s emerging diseases and this component is liable to increase as industrial livestock production methods are adopted in the tropics where infectious disease burdens are relatively high. Vector borne zoonoses are of particular concern and the recent observation of domestic pigs as potential reservoirs of human and animal trypanosomiasis in northern Tanzania compounds fears over arbovirus transmission from livestock reservoirs to provide both an alarming and sobering illustration of the kinds of hazard that bringing affordable Christmas dinners to everyone’s table may entail.

[…] production currently leads the global demand for anti-coccidial products, but the biggest future expansion of the poultry industry is set to occur in Africa and Asia, thus new priorities are emerging. Shifts from traditional to intensive poultry production using […]