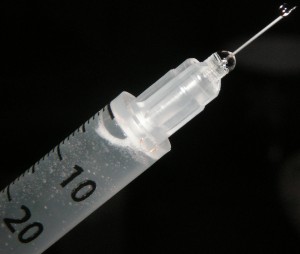 The latest results from the RTS,S Phase III trials have fuelled considerable excitement from the media, with talk of the “World’s first malaria vaccine” and its potential to “save 200,000 lives  a year”.

RTS,S was developed in partnership by Glaxo Smith Klein (GSK) and the PATH Malaria Vaccine Initiative (MVI), and has been trialled across thirteen  centres in eight different African countries. It is currently undergoing Phase III evaluation, making it the most clinically advanced vaccine candidate for malaria. After encouraging results, GSK have expressed their intent in applying for approval from the European Medicines Agency (EMA)1 and the vaccine will be assessed by the world health organisation (WHO) in late 2015 for policy recommendations2.

The WHO estimates that there are 219 million cases of malaria and 660,000 deaths a year, 90% of which are in Africa4. Earlier studies showed that RTS,S reduced the incidence of malaria up to around 50% in children aged 5-17 months and 30% in infants aged 6-12 weeks, with similar percentage reductions in disease severity in both age groups.3 This brings us back to the headline- the suggestion that this vaccine could save up to 200,000 lives a year.

Overall, the vaccine does significantly reduce the number of cases of malaria (see fig 1) but with all the hype in the media as each set of results are released, it’s a concern that the general public might perceive the new vaccine as a “magic bullet”, and perhaps even the end of taking all those tablets and sleeping under sweaty bed nets when you go on holiday.

The battle against malaria is complicated by the parasite’s life-cycle. There is massive amplification of asexual parasites in the blood in the human host as well as amplification in the mosquito stages during the development of infective sporozoites. A vaccine such as RTS,S that targets the human stages of the parasite will reduce transmission from the human host to the mosquito vector, but ideally needs to be used in conjunction with measures that prevent transmission from mosquito to human i.e bed nets, repellents, insecticides etc or a transmission blocking vaccine (TBVs).3 RTS,S will be and was always intended to be used as an additional tool for the control and possibly the eradication of malaria- even the WHO reports that “RTS,S/AS01 will be evaluated as an addition to, not a replacement for, existing malaria prevention, diagnostic and treatment measures”2.

So don’t throw out your bed nets and malaria tablets just yet.

[…] The recent Parasites and Vectors blog by Vera Unwin picked up on the attention given by the media to the encouraging announcements concerning the RTS,S malaria vaccine. This vaccine, as others have done, deploys the strategy of attacking the sporozoite stages of the parasite as they enter the body following the bite of an infected mosquito. However the vaccine is only partially efficacious and could not be used alone as a tool to control or eradicate malaria. […]