HELMINTH PARASITES are fascinating. While we marvel at their convoluted life cycles, never growing tired of regaling the morbid details of their pathologies to our loved ones over sushi, Udon noodles, or a blue rib-eye (unaware, of course of the insensitivity shown in the process…) we mustn’t forget about the other, equally fascinating side of the story: the host response to infection.

It has been suggested that an entire arm of the vertebrate immune system evolved almost exclusively to respond to infection by helminth parasites1. This ‘Type 2’ immunity largely differs from responses which typically govern anti-viral or bacterial immunity (‘Type 1 ’ systems), and utilises numerous unique components, both innate and adaptive . However, one particular facet – the role of type-2 innate lymphoid cells (ILC2), has been enjoying the limelight in the past few years; a result of not only the discovery that these cells are critical mediators of type-2 immunity, but also the description of a hitherto unknown immune cell lineage.

With the aid of the parasite Nippostrongylus brasiliensis, used as a model of nematode infection in mice, ILC2’s were identified by a number of researchers around about the same time and include nuocytes, natural helper cells, multipotent progenitor cells and type -2 innate helper cells2-5. Central to the role of these cells as important players in anti-helminth immunity was the discovery that ILC2’s are potent, innate producers of interleukin  (IL) -13 in response to helminth infection. Along with IL-4, IL-13 is a cytokine of paramount importance to  type-2 immunity and both signal through a common receptor subunit (IL-4Rα) to exert their actions via STAT-6 phosphorylation and activation. It has been shown that ILC2’s, not adaptive type 2 CD4+ helper T cells (Th2)  provide the essential source of IL-13 during primary Nippostrongylus infection, and that therefore, these cells act as essential early responders to infection, in the absence of a specific acquired or memory response4-5.

As with all things new (and indeed, anything remotely interesting!), the discovery of ILC2 cells has generated a hotbed of questions begging to be answered. For example, how do these unique cells develop from their progenitors? It has already been shown that Id2 (a transcriptional regulator), plays an early role as a differentiator of all ILC development. However, whereas the nuclear receptor ROR-γt is essential for Natural Killer cell  development (another type of ILC) , ILC2’s instead utilise ROR-α for their generation6. Work published in the last year  has driven understanding of the developmental requirements of ILC2’s further; Gata3, a transcription factor with a major role to play in type 2 polarisation of immune responses, had already been shown to regulate IL-13 and IL-5 expression by ILC2’s and is now implicated in their development from haematopoietic stem cells7. The complex but fascinating pathway regulating ILC2 development unravelled more still recently, thanks to the demonstration that T cell factor 1 (TCF-1) also aids differentiation of these cells and in its absence, type-2 cytokine production not only falls dramatically by the wayside, but ILC2 numbers are severely diminished8-9.

Why does any of this matter? Who should care about which proteins and factors with annoying acronyms govern the development of a cell type which – although evidently important in a mouse model of nematode infection, on the surface seems to have limited scope in its function?

Essential to this story is the fact type-2 immune responses, while predominately adaptive to the host during helminth infection, are a major cause of pathologies and tissue damage associated with allergic disorders and respiratory illnesses including asthma. Importantly, ILC2 cells have been strongly implicated in murine models of these illnesses10; as is the case during Nippostrongylus infection, these cells appear to govern the majority of airway inflammation, even in the absence of type-2 cytokine producing T cells. In contrast, ILC2’s seem to be recruited in order to induce tissue repair through the down regulation of pro-inflammatory cytokine production during viral hepatitis11, highlighting the potential advantageous role these cells can play outside of helminth associated immunity; distinct from their seemingly disadvantageous role in allergic airway disease.

A big question now is, how transferable are these findings to human pathologies? It seems to be the case that analogous cells can be identified in humans12, but their role during parasite infection or respiratory disease pathology has not yet been fully explored. As we learn more about these cells and the factors which drive their development, we will no doubt begin to explore the ways in which these cells may be targeted and manipulated. In this sense, these cells do not represent merely an exciting novelty associated with helminth infection, but rather, a powerful (though as yet, tentative) tool in the treatment and management of a variety of illnesses of global importance. 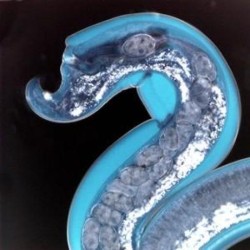