The Chow Chow is an East Asian dog breed and one of the first to emerge after the domestication of the dog. It is believed that they were the models for the stone lion statues which guard Buddhist temples.

Chow Chows have a sturdy build, straight hind legs and very dense fur, particularly in the neck area, giving the impression of a mane. The breed also possesses more unusual features such as an extra pair of teeth (44 instead of 42) and a distinctive blue/black tongue. The temperament of the breed is said to be fiercely protective of its owners whilst being discerning towards strangers.

From wolf to dog

Of all the species that were successfully domesticated, dogs (Canis lupus familiaris) are the only large carnivore able to thrive in a human created environment. Our understanding of the history of this domestication is still far from complete and the origin of the domestic dogs’ descent from gray wolves (Canis lupus) is of great debate. Various studies present conflicting conclusions, identifying Southern East Asia, Central Asia and Europe as the geographical origin of dog domestication.

We do know that the indigenous dogs of China and the ancient breeds from East Asia have been identified as the most basal lineages relating to gray wolves. These include breeds such as Chow Chow, Akita and Shiba Inu.

Compared to many European breeds, which underwent intense artificial selection over the past 500 years, Ancient East Asian breeds carry substantially more genetic variability. It has been suggested that this comparatively high genetic variability indicates the origin of domestic dogs is in East Asia and that this occurred around 33,000 years ago, followed by a global dispersal of dogs out of southern East Asia around 15,000 years ago. This gave rise to domestic dog populations with an ancestry gradient moving away from gray wolves.

Using the Chow Chow as an example ancient East Asian dog breed, the authors of an article recently published in BMC Genomics, conducted a systematic study that looked to characterize the origin of East Asian dogs. The researchers sequenced the genome of nine Chow Chows using a Restricted site Associated DNA (RAD) sequencing approach. This data was combined with genome sequences of 37 canid species including gray wolves, Chinese indigenous dogs and other dog breeds, all collected from previous studies. 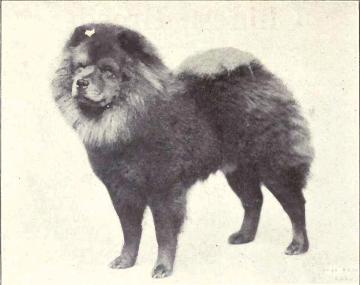 Despite having features like a thick coat which suggest an origin in a high altitude environment, the authors’ analysis found that Chow Chows were in fact selected from Chinese indigenous dogs which are of Southern origin. They also found that the Chow Chow and other East Asian dog breeds must have originated from Chinese indigenous dogs very early, as much as 8,300 years ago.

The authors theorize that the selection of the Chow Chow from Chinese indigenous dogs may have been facilitated by agricultural that started near the Yangtze River around 11,000 to 9,000 years ago which created a sedentary environment for humans. They add that examining the creation of Asian dog breeds in unison with human development is an “enchanting picture waiting to be told”.

The formation of the Chow Chow breed has previously been thought of as gradual. When an emerging breed is under development, you could expect high genetic exchange with the source population due to low differentiation. However the authors found that there was a surprisingly low gene flow between Chow Chows and Chinese indigenous dogs.

This suggests that the creation of the Chow Chow breed was relatively rapid with subsequent interbreeding restricted. This mode of breed formation may be quite common among many ancient breeds as low gene flow was also found across East Asian dog breeds.

Furry, strong and a blue tongue

When examining the phenotype of the Chow Chow, the authors found that traits unique to the breed like a blue tongue and a thick coat are not strongly indicated in gene ontology analysis. This could mean that the coding for these distinctive phenotypes is limited to only a few genes.

Genes for traits such as muscle and heart development as well as metabolism and digestion were found to have been extensively selected for. This is consistent with knowledge that Chow Chows were kept as sporting dogs in their early development.

Whilst this study helps to characterize the origin of East Asian dog breeds and sheds light on the distinctive traits of the Chow Chow, a much loved breed, there is still a lot of work to be done in to unravel the complex history and definitive origin of man’s best friend.

I very much appreciate this blog highlighting and making the results of this recent and very interesting piece of research accessible to most lay people.
There are, however, some aspects of this research into the have either been not addressed or slightly misconstrued.
While DNA may suggest the evolutionary relationship to the Chinese Indigenous Dog, and by inference, originating in south eastern China, two questions have not been addressed: the tail of the Chow curls up over and rests on the back in a fashion similar to that of most Spitz breeds, particularly those from the Arctic Circle region of the Eastern Eurasian Steppe area – a feature to keep the tail from dragging in snow and dragging the dog back. Secondly, the breed also has a double coat again similar to those arctic Spitz. From an evolutionary perspective, one can’t help question why a double coated breed would develop in southern environs where such a development would be detrimental to the animal.
One of the findings of the researchers is that Chows have 44 teeth, like other primitive and some wild breeds. However, what the researchers do not say is that the 44 teeth of the Chow are milk teeth only and that with the adult set of teeth, they have a standard set of 42 teeth, like other canines.
Further, what is not mentioned, and may simply be a question not considered as too difficult to resile, is that further back in evolutionary timescales, canines and ursines have a common ancestor – is there a link between bears having 44 teeth and some canines having 44 teeth, rather than it being dismissed as a mere fluke of mutation.
Again, casting to the potential ancestral link with bears is the fact that Chows (and Sharpeis) have blue black pigment on their tongues and in the whole of their mouths. The only other carnivore to carry blue black pigmentation in their mouths are species of bears, ie, polar bears, kodiak bears, grizzly bears.
While the information in the research paper is very interesting and very welcome, rather than indicating that even further research is warranted, there has been some rather best guess conclusions drawn, which is disappointing.