Evolutionary origins of sensation in metazoans: functional evidence for a new sensory organ in sponges

Sponges, as one of the earliest multi-cellular phyla to have evolved, lack many of the features necessary for organised behaviour in other animals; no nerves, muscles or any kind of central nervous system. Despite this, sponges are still capable of demonstrating organised behavioural responses to external stimuli. One example of this is the ability to ‘sneeze’; that is, to remove waste products by a co-ordinated series of contractions. Sally Leys and colleagues at the University of Alberta demonstrated that this is achieved by the actions of cilia acting as sensors. Such arrays of cilia could represent the first evolutionary step towards the more complex organised behaviours of other animals. We covered this research in more depth on our blog in January. The reasons behind female mate choice continues to be a hot topic in evolutionary biology. This research on mice, conducted by Shirley Raveh and colleagues at the University of Veterinary Medicine Vienna, provided the first direct evidence that mate choice enhances offspring tolerance to infectious diseases. The offspring of females allowed to mate with the male of their choice had greater disease tolerance than the offspring of females who had to settle for mating with a second choice male. Are females directly selecting for males with better disease resistance genes or just allocating more resources to the offspring of better males? Future research will tell us. We covered this study in more detail on both our blog and our online magazine Biome.

Resolving the evolutionary relationships of the green plants, a group that evolved at least 700 million years ago and contains around 500,000 species, is no easy task. This study, from researchers at the University of Florida and East Kentucky University, utilised a number of new plastid sequences that have been produced in recent years using next generation sequencing techniques, to provide the most comprehensive phylogeny of green plants yet. For more on this research, see Biome’s Q&A with lead author Brad Ruhfel and a commentary on the paper, published in our sister journal BMC Biology.

4. A history of lions 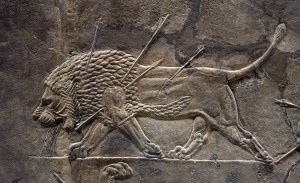 Today, lions are found only in sub-Saharan Africa, with the exception of one critically endangered Asian population. Yet before human persecution exterminated many sub-species, they once roamed across Africa, Asia, Europe and the Middle East. Ross Barnet and co-authors used mitochondrial DNA taken from bone and tissue specimens from these extinct populations to investigate their relationships to the remaining lions. Their results provide new insights into the migration of lions out of Africa and into Europe. The work also has important conservation implications, suggesting that West and Central African lions are genetically distinct from the (much more numerous) East African lions and so deserving of special conservation attention. More on this work in our blog.

5. As dead as the Dodo and twice as mysterious

The Spotted Green Pigeon, long extinct, is known to us today only through a single surviving museum specimen. Exactly where it lived, its relation to other species, or even if it was a unique species all remained unknown, until the publication of this research in July. Using DNA extracted from the museum specimen’s feathers, researchers led by Tim Heupink of the ancient DNA facility at Griffith University in Australia confirmed that the Spotted Green Pigeon is a unique species. The results also provided clues to the evolution of that rather more famous extinct bird, the Dodo. Read more in our blog. Thylacocephalans, a group of long extinct arthropods, are an excellent example of the enigmatic groups we find in the fossil record, so unlike any modern creature that working out exactly what modern animals they are related to is no easy task. That made the discovery of the oldest thylacocephalan fossil yet found, described along with a number of other new fossils by Carolin Haug and her co-researchers, such an important find. The new fossils provide an insight into how this group evolved over time and good evidence that they belong to the crustaceans. More on this research, including many excellent images from the paper, in our blog.

The parasitic fungi Ophiocordyceps exert a truly remarkable control over the behaviour of their infected ant hosts. Famously, the fungus turns the ant into a ‘zombie’ which climbs the stalk of a nearby plant, clamping itself into place with its jaws; the fungus then sprouts from the unfortunate ant’s head, spreading its spores onto the area below to infect new hosts. This paper, by Charissa de Bekker and colleagues at the University of Pennsylvania, showed that while individual Ophiocordycepsspecies can infect a number of different ant species, they can only control the behaviour of their specific host species. The authors suggest this could be linked to the different metabolites secreted by the fungi. This study, and the wider work of the research group, were covered in more detail by our colleagues on the BugBitten blog. Complex body size trends in the evolution of sloths

While today all species of sloth are small, tree-dwelling creatures, a much greater diversity of sloths existed in the past. Indeed, as Sara Raj Pant and colleagues concluded in this study, modern day sloths are quite different from a typical member of the sloth family. By including fossil species in their phylogenetic analyses, they showed an overall trend for sloth species to increase in size over evolutionary time. The small tree-climbing sloths we see today are more like the ‘black-sheep’ of the family, while the giant ground sloths that roamed South America until as recently as 10,000 years ago are more typical of how this unique family evolved. We covered this research in more detail in our blog in September.

9. Effects of radiation on Japanese butterflies

The meltdown of the Fukushima nuclear power plant in Japan was one of the worst man-made environmental disasters in history. The issue of what potential effects the radiation released will have on the surrounding wildlife continues to be controversial. Building on previous work by researchers at the University of the Ryukyus, this study found that feeding lab-reared larvae of the pale grass blue butterfly (a common species in the region) leaves contaminated with relatively low levels of radiation resulted in a higher mortality rate than individuals raised on non-contaminated leaves. These effects were passed down the generations, but could be overcome by switching offspring to a diet of non-contaminated leaves. Lead author Joji Otaki discussed his research in this guest piece on our blog. 10. To look this much like a leaf takes ages

Many butterfly species use mimicry and camouflage to avoid predators. Kallima butterflies have long been considered remarkable by biologists for their mimicry of leaves. They have also been seen to present an evolutionary conundrum; how did this mimicry evolve? After all, while the survival benefits of looking exactly like a leaf are clear, what are the benefits to a butterfly in the early stages of the evolution of this mimicry of looking a little bit like a leaf? Some recent research (including this paper we published in August) suggest there might be no need for intermediate steps; a mutation in a single ‘supergene’ can cause substantial differences in wing colouration. In this article though, Takao Suzuki and colleagues at the Japanese National Institute of Agrobiological Sciences suggested that such mimicry can evolve gradually. Their research provides the first evidence for a stepwise and contingent evolution of leaf mimicry.

Some additional articles published in BMC Evolutionary Biology this year which were covered in the BMC series blog or our online magazine Biome:

–          In February, we uncovered the invasion of the cannibal ladybirds in this blog about the paper ‘Cannibalism in invasive, native and biocontrol populations of the harlequin ladybird’.

–          In March, we discussed fascinating research on ‘Active hiding of social information from information parasites’ in our blog ‘Hiding the truth – how one bird fools another’.

–          We also uncovered the secrets of the cryptic bushbabies in our blog on the research article ‘A multilocus phylogeny reveals deep lineages within African galagids’.

–          In May we walked with moas in our blog on the paper ‘Reconstruction and in vivo analysis of the extinct tbx5 gene from ancient wingless moa’.