The event was put on by colleagues from INVOLVE, Centre for Public Engagement, Kingston University and St George’s, University of London and University College London Centre for Co-production in Health Research. We were supported by Academic Health Sciences Network for Kent, Surrey and Sussex and National Institute for Health Research Design Service London.

We are grateful to our speakers, attendees and followers on Twitter for making the day a successful one.

The sharing of power is the key principle in co-producing research and this is reflected in guidance co-produced by INVOLVE and colleagues from National Institute for Health Research and beyond.

The event was an opportunity to explore the power sharing aspect of co-production. It was also an opportunity for people to showcase their work and to network. Finally, with attendees including public members, researchers, healthcare practitioners and staff from National Institute for Health Research, it provided a platform for us to talk, learn from and challenge each other.

As was acknowledged during the event sharing power can be challenging. There were many observations and potential opportunities raised during the event, too many to list them all here but here are a small number of them:

We may not have solved any of these challenges but as Rebecca Baines, Researcher at University of Plymouth and John Donovan, public member noted -‘co-production begins with a conversation.’

This was our second event on ‘co-production’. Our first one ‘tested the market’ and the 50 places available were snapped up in a day. This year we doubled the number and found that within four working days all the 120 tickets had gone and we had 50 people on the waiting list.

Already we have had people suggesting that this should be an annual event – and we will partner with the journal Research Involvement and Engagement in 2020 – and requests to ‘take it on tour’ (Manchester and Newcastle have already been suggested). All things (or nearly all things!) are possible and we would like to hear from potential partners from the different regions about working with them. Let’s continue the conversation and build our co-production community. 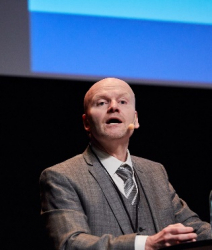 Gary Hickey is a Senior Public Involvement Manager at INVOLVE. Gary has a background in health research including public involvement in research. At INVOLVE he is responsible for developing the International Network for Public Involvement and Engagement in Health and Social Care Research as well as work on co-production in research.
Gary.Hickey@nihr.ac.uk
#Howtocopro