Picture a girl from Kentucky. She works hard in school, excels in her studies, and graduates from Vanderbilt with a degree in science.

Picture another girl from Kentucky. She enters beauty pageants, practices with friends and family, and wins the Miss Kentucky crown in 2017 as a senior in college.

You might be picturing two very separate individuals, but they are in fact the same person.

Madelynne Grace Myers seems to live two separate lives, but in reality she lives the life of a true millennial; breaking the stereotypical mold for no other reason than it should not exist to begin with.

Myers attended an all girls school until the 8th grade, saying, “everyone was on the same page,” with regards to school and social life. Things became different in high school, and certainly college, where women would wear heels and full make-up…to class. The atmosphere was decidedly geared toward gender roles being the college culture, perhaps less then learning. Though the current campus culture has begun to change, “You get judged by your peers,” said Myers, mentioning comments men would make during class and lab. An aspiring physician, Myers described classmates who started to wear make-up simply to be more respected by their peers.

When I said I wanted to become a doctor, Myers stated, people tried to talk me out of it. Male doctors she shadowed warned her that their female colleagues became “bitter” in the profession. But that was not what women physicians were saying; and Myers was not to be deterred.

What astounded her most was that people seemed to take her more seriously in her viewpoints as Miss Kentucky then as young scientist, and were more willing to listen to her on a platform that might not necessarily be associated with science.

But then again, why shouldn’t it be?

Education is not nor should it ever be associated with anything other than achievement and progress in the field, so why is the stereotypical image of a women in STEM sometimes negative in some societies?

I’m proud of them, she says of the young women following in her footsteps.

“I want to be a role model for students,” Myers explained of her actions, who might not otherwise have the opportunity to see another woman succeed in science, and also have a life outside of their career. “They are a role model to me, as well as a role model for younger generations.”

Right now, Myers is applying to medical school. “I hate applying, it’s not fun,” she says with a laugh. The essays, MCAT, and various other requirements is an extensive process, though the reward at the end is certainly worthwhile.

One of the most important things, she emphasized on her path to applying to medical school, is women helping in the success of other women. “We are stronger together,” she says firmly, content in her knowledge that she will not be the first woman to enter into a profession dominated by men, nor will she be the last.

We wish her all the best in her journey. 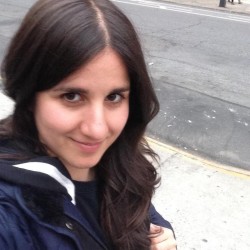